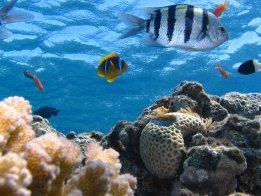 The report characterised the risk to the aquatic environment from scrubbers as acceptable. File Image / Pixabay

Engineering consultancy DHI has prepared a report on 'ecotoxicity testing and risk assessment of washwater from open-loop scrubbers' on behalf of the EGCSA, the organisation said in an emailed statement on Thursday. The research was conducted in accordance with the IMO GESAMP guidelines.

The study evaluated the effects of washwater on the marine aquatic environment, finding no toxicity on fish and some effects in the short term with algae and on crustaceans at high concentrations.

The report characterised the risk to the aquatic environment from scrubbers as acceptable.

"The study puts to bed the myth and unsubstantiated claims of some NGOs who are simply seeking to ban the use of residual fuel oil," Don Gregory, director of the EGCSA, said in the statement.

"They have used rhetoric, sensationalism and unsubstantiated claims or pseudo studies to attempt to discredit scrubbers."

Opinion on open-loop scrubbers remains divided, with environmental bodies including the International Council on Clean Transportation (ICCT) calling for an IMO ban on their use in certain areas. Concerns over the impact of scrubber washwater on marine life have prompted several authorities around the world to ban its discharge in their waters.

The firm is looking for candidates with a minimum of ten years of experience in designing maritime electrical and automation systems.