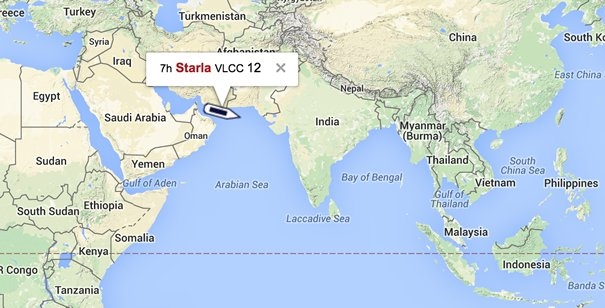 An Iranian supertanker understood to have been used as floating storage in Iranian waters since December, is heading to Singapore loaded with two million barrels of oil, Reuters reports.

Iran is currently storing as much as 51.4 million barrels of crude in floating storage in its waters

It is believed to be the first such shipment of oil from the Islamic Republic since the so-called P5+1 global powers earlier this week reached a deal over sanctions against Iran, and comes despite some analysts predicting it would most likely be the second half of 2016 before Iran made a return to the market.

Iran is "likely assuming that either a small increase in exports will not undermine the historic accord reached, or, that no one would notice," analysts at Macquarie wrote in a research note.

today's developments could be the start of a flood of oil coming onto the market, putting significant downward pressure on prices.

"This is the first tanker to come off floating storage," a source was quoted as saying.

"One of the scenarios is it could do [a ship to ship] operation, although nothing is known at the moment."

P&I clubs Thursday said that while this week's deal will mean that existing sanctions can be lifted and protection and indemnity insurance will once again become available to vessels carrying Iranian oil, it will be at least 90 days before any agreement comes into force and shippers have been warned to exercise caution handling Iranian product.

Sources indicate that Iran is currently storing as much as 51.4 million barrels of crude in floating storage in its waters, and analysts have expressed concern that today's developments could be the start of a flood of oil coming onto the market, putting significant downward pressure on prices.

prepare for crude falling as low as $30 per barrel

That pressure would be in addition to the fact that last month Iran told members of the Organization of Petroleum Exporting Countries (OPEC) to "make room" for an estimated additional 1 million barrels a day of supply that it intends to produce within six months of sanctions being removed.

Earlier this week analyst Carley Garner warned players to prepare for crude falling as low as $30 per barrel, or $226 per metric tonne (pmt), as a result of the additional Iranian oil, which it if happened would mean bunker buyers could reasonably expect IFO380 prices to fall as low as $158 pmt.

But lack of investment seems to ensure tight supplies in the near-term, says Vitol.

GRM-EOT Ltd has recently been awarded a bunkering licence by the Mauritius Ports Authority.