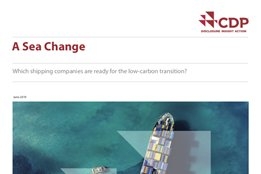 CDP, a non-profit whose goals include getting companies and governments to reduce their greenhouse gas emissions, has backed the use of LNG bunkers.

In a new report that looks at ways the sector can reduce its carbon intensity and ranks publicly listed shipowners on their current efforts in the area, CDP says "LNG plays a significant role as a transition fuel in the IEA's below 2°C scenarios, presenting a growth opportunity for ships carrying LNG out to 2040."

The endorsement will no doubt welcomed by LNG advocates, who in recent months have been pushing this same message hard, most recently with the release of a long awaited "well-to-wake" study of the alternative fuel that finds LNG can provide lifecycle GHG savings of up to 21% compared with current oil-based bunkers.

But CDP's position also highlights the difficulty shipowners have in understanding what the "right" thing to do is when making choices on future environmental technologies, with fellow green group Transport & Environment insisting LNG is not significantly better on GHGs than current oil-based bunkers.

Shipping companies are facing a sea change on the horizon

Still, among CDP's other observations likely to gain industry approval is acknowledgement that Marine freight is the least emissions intensive way of moving cargo, and the industry's need for Low-carbon fuels such as biofuels, hydrogen and ammonia is challenged by underdevelopment.

The non-profit also weighed into the recent debate on increased slow steaming as an emissions reduction tool, saying it was positive in the short term, but warned it could result in more voyages to meet growing demand, eroding the emission reductions made by slowing down ships in the first place.

"Against the backdrop of the IMO's targets, the industry needs to drive collaboration with the manufacturers of vessels and shipping technologies to develop the step change innovations needed to have any chance of meeting these goals. Separately, our recent analysis of the capital goods sector also shows that these manufacturers are much more focused on transformative change in power generation and other areas of transport than in technology solutions for the shipping sector."

The company will aim to address how lubricants may need to change as the shipping industry shifts to lower-carbon fuels.

Canada's CBH to Invest in VLSFO Production in Oman

Production capacity at the site is expected to be ramped up to 300,000 b/d in phases.

The shipment is the latest evidence of shipping companies' customers showing interest in pushing forward the decarbonisation of seaborne freight.