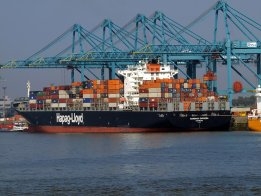 Hapag-Lloyd is not rushing to convert more of its ships to LNG propulsion. File Image / Pixabay

Container line Hapag-Lloyd has put on hold plans to retrofit any more of its fleet to run on natural gas while it evaluates the results of its first such conversion.

Plans for further retrofits have been 'postponed', a spokesman for the company told Ship & Bunker on Monday.

"We are currently making first experiences with our converted vessel Brussels Express -- and will then decide how we proceed," the spokesman said.

"We will evaluate the performance of our LNG vessel in the next months and then decide about next steps."

The company first announced plans to retrofit one of its 15,000 TEU boxships to run on LNG in 2018. That conversion -- of the Brussels Express, previously named Sajir -- has now been completed, at a cost of $35 million.

For us LNG is a good interim solution until CO2-free fuel is available.

Received wisdom in the shipping industry had tended to view retrofits to LNG propulsion as unlikely to be widespread on cost grounds, with newbuild ships being seen as much more likely to take on LNG bunkering.

The Hapag-Lloyd spokesman declined to comment on whether the retrofit cost was a factor in the decision to postpone future conversions. He also denied that recent surges in LNG bunker prices -- now more than three times higher than at the start of the year, according to Ship & Bunker pricing -- were a factor, and said the company remained in favour of LNG as an alternative fuel.

"Gas prices do not play a role at the moment," the spokesman said.

"LNG is criticized because of methane leaks when exploiting it.

"For us LNG is a good interim solution until CO2-free fuel is available.

"As this is not the case right now, we believe that LNG is a good solution on the way towards decarbonisation.

"We have ordered 12 dual-fuel ultra large container vessels -- this shows our commitment to LNG."

The company has analysed 14 million barrels of VLSFO across 28 batches using its Digital Chemist AI system.