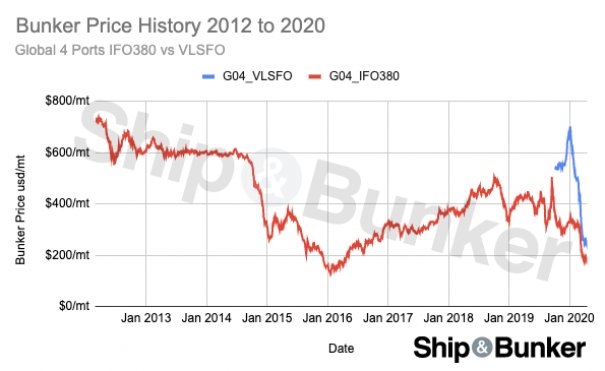 The price of IMO 2020 compliant VLSFO bunkers in the four major bunkering hubs hit a new low Thursday alongside the continuing decline in the price of crude.

Taking into account that IFO380 was the dominant bunker fuel being lifted by buyers prior to the January 1, 2020 introduction of the 0.50% sulfur cap and the vast majority of vessels are now burning VLSFO, in real terms bunker costs hit their lowest since August 15, 2016 when the G4 IFO380 price was $232/mt.

One major different since then is the cost of crude. Brent last Thursday was $27.82/bbl, while back in mid-August 2016 is was just under $50/bbl.

Lower sulfur VLSFO fuel is still more expensive than its high sulfur counterpart, with the G4 IFO380 price last Thursday $173/mt, but the narrowing of that price spread is now starting to put pressure on the economics of scrubber-equipped tonnage.