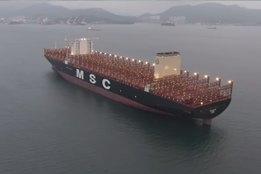 The world's largest capacity box ship, MSC Gulsun, this week departed on her maiden voyage from Tianjin in northern China.

The first of the six 23,000 TEU-class vessels that Swiss carrier Mediterranean Shipping Company S.A. (MSC) ordered from Samsung Heavy Industries (SHI) in 2017, perhaps the vessel's most notable feature for bunker industry watchers is that she is fitted with a scrubber.

As many as 4,000 ships are now believed to be on track to be scrubber equipped when then new global 0.50% sulfur cap comes into force next year, and thus will be able to continue burning HSFO.

How much ongoing high-sulfur demand this will translate into remains to be seen, but several respected voices believe that as it is the very biggest ships that are being fitted with scrubbers, a third or more of 2020's overall demand could remain as HSFO.

If nothing else, the arrival of MSC Gulsun is further support of that narrative.

What's more, the mega-boxship has been built LNG-ready for easier conversion to use the alternative fuel, so has the potential to skip burning 0.50%S IMO2020 grade bunkers altogether.

The company has committed to operating the terminal until at least 2028.

29 out of the 45 bunker suppliers registered in Singapore have VSLFO available, according to the MPA.