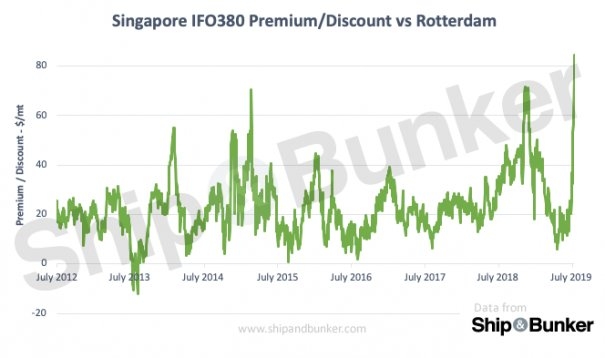 Market participants have pointed the finger firmly at IMO2020 as the reason why a recently rising premium for bunkers in Singapore vs Rotterdam hit new highs last week.

The difference of $84.50/mt was the highest since at least March 2012 when Ship & Bunker records began.

The spread narrowed to $82/mt Friday as bunker prices retreated, but overall the Singapore premium has been rising sing the start of the month. It sat at just 32.5/mt on July 1 and prior to that has averaged $23.9/mt during the first half of 2019.

Moreover, relative to crude Rotterdam bunkers are not particularly cheap either, priced Friday at a discount to Brent of around 18%.

But IFO380 in Singapore Friday was at a discount to Brent of just 1%.

The spike has also been picked up in S&P Global Platts data, who Friday reported its Singapore delivered 380 CST bunker premium over MOPS 380 cSt HSFO hit a 16+ year high of $33.57/mt as at last Thursday's close.

Traders said preparations for the shift IMO2020 grade products in the region was part of the reason for the widening spread.

"I guess [IMO] 2020 is also a game-changer...most of the VLCCs outside are now storing LSFO," Platts quoted a marker source as saying.