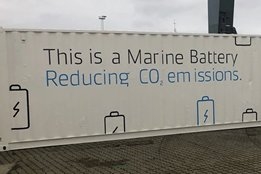 Maersk today said will test the use of containerized battery power as part of efforts to reduce its CO2 footprint.

The 600 kWh marine battery system will be installed in a trial on board the Maersk Cape Town in December 2019.

While battery power for smaller vessels is increasingly proving to be a viable option, it looks likely be many years until this is the case for large ocean going vessels.

However, Maersk says marine battery systems can be used to improve the efficiency of a vessel's onboard electrical systems such as the Maersk Cape Town's generators.

"This trial will provide a greater understanding of energy storage that will support Maersk in moving towards further electrification of its fleet and port terminals," Maersk COO Søren Toft said in a statement released today.

"Maersk will continue to facilitate, test, and develop low-carbon solutions on our journey to become carbon neutral by 2050."

The trial is just the latest in a growing list of climate-focused trials Maersk is participating in, that range from the use of alternative fuels to wind power.