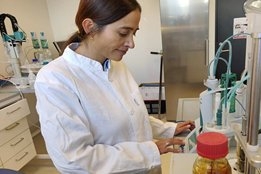 Shipowners Maersk and Wallenius Wilhelmsen, along with several of their high profile customers, have formed a new group to explore whether Lignin Ethanol Oil (LEO) is a viable low-carbon bunker fuel of the future.

The group, which also involves Copenhagen University, BMW Group, and Levi Strauss & Co., are calling themselves the LEO Coalition.

"Shipping requires bespoke low-carbon fuel solutions which can make the leap from the laboratory to the global shipping fleet. Initiatives such as the LEO Coalition are an important catalyst in this process," says Søren Toft, Maersk Chief Operating Officer.

Lignin are a class of highly abundant organic polymers found in the cell walls of many plants and trees. Recent research results have shown it to be a promising candidate for the production of universal biofuels.

"Lignin is isolated in large quantities as a byproduct of lignocellulosic ethanol and pulp and paper production factories. Currently, it is often incinerated to produce steam and electricity," the group explained in a press release today.

Craig Jasienski,  CEO of Wallenius Wilhelmsen, says one attraction of LEO is it has the potential to be a viable fuel solution for today's fleet, and "not just a future vision."

Copenhagen University is currently running the lab-scale development of the potential marine fuel that will only utilise sustainably sourced and certified ethanol.

The project aims to move into phase two – testing the fuel on engines – in Q2 2020. Following a successful phase II, phase III will begin – the scaling up of LEO fuel production.

However, the current Iraq skirmish is dismissed as irrelevant to crude.