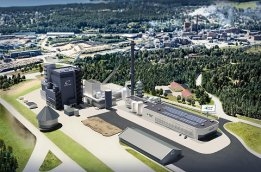 Ships can cut their emissions by as much as 94% compared to conventional bunker fuels by running on synthetic methanol, according to Sweden's Liquid Wind.

The synthetic methanol start-up has produced a life-cycle assessment analysing the potential emissions of its product, it said in an emailed statement on Monday. The firm will host a webinar on April 28 discussing the results.

The firm sees synthetic methanol producing about 5g of CO2 equivalent per MJ of energy, compared with 85-90gCO2eq/MJ for fossil fuel bunkers.

"Together with our consortium partners, Liquid Wind is demonstrating the potential that sustainable marine fuels can make to reducing carbon emissions when carbon is considered on a lifecycle basis," Claes Fredriksson, CEO of Liquid Wind, said in the statement,

"With further regulatory alignment, marine fuel buyers and end users can understand how to make their operations cleaner and greener and demonstrate that to their stakeholders."

Focus is to improve efficiency of maritime battery power.