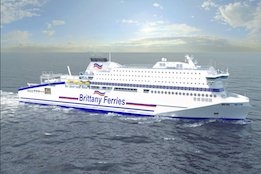 Honfleur is scheduled to enter into service in April 2019. Image Credit: Brittany Ferries

Societe Generale acted as the main arranger of the €142.6 million ($167.29 million) financing for the acquisition of the Brittany Ferries-comissioned Honfleur ferry, including a tranche of €49.5 million ($58.07 million) fully guaranteed by the EIB.

"Brittany Ferries is doubly proud today," said Jean-Marc Roué, Chairman of Brittany Ferries' supervisory board at the signing ceremony yesterday at the Ministry for Europe & Foreign Affairs in Quai d'Orsay in Paris.

"It is the very first shipping company to benefit from the framework agreement concluded in 2016 between the EIB and Société Générale, under the GSG Programme, thanks to the Juncker Plan and the CEF. But also, thanks to this financing it becomes the first French passenger transport company to pave the way towards energy transition using LNG."

As Ship & Bunker has reported, Brittany Ferries says its Honfleur - which is scheduled to enter into service in April 2019 on the Caen-Ouistreham, France and Portsmouth, UK route - will become will be "the most environmentally friendly ship regularly operating in UK waters."

EIB Vice-President Ambroise Fayolle, commenting on the new support, said: "by structuring riskier financing in a new sector, the bank of the European Union strongly reaffirms its commitment to sustainable, responsible and sustainable growth on an international level. Our goal is to support the efforts of French shipowners to develop a more environmentally friendly maritime transport thanks to an adapted and attractive financing tool."

The firm is seeking to hire an operations executive, a trading analyst and a finance assistant in an apparent expansion in Singapore.

The firm is looking for candidates with a solid legal background, and preferably 1-3 years of relevant experience working for an international-oriented in-house corporation or a law firm.