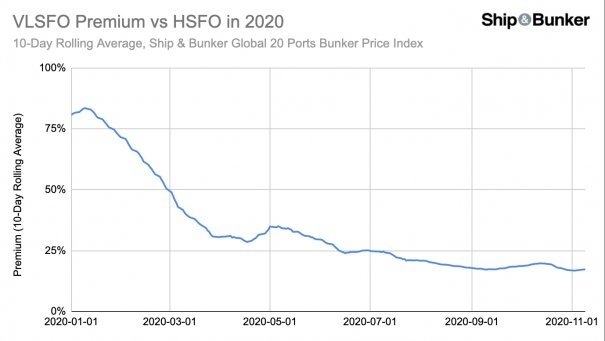 Songa Container remains upbeat on scrubber technology despite announcing it has indefinitely postponed the final two of its planned unit installations, a move prompted by the spread between HSFO and low sulfur fuel remaining unfavourably low.

The company owns a fleet of 15 container vessels and has completed scrubber installations on 12 of them, having originally planned to put units on 14 of them.

"Fuel spreads between Compliant and Non-compliant fuel (3.5% vs 0.5% sulphur fuel) remain historically low and only marginal improvements to this situation will be seen in the near term as the World and its consumer and transportation habits continue to grapple with the ongoing COVID-19 pandemic. As a result, the profitability of the scrubber investments are expected to be low in the short term," the firm said in its latest third quarter report.

As Ship & Bunker reported earlier this month, the premium for compliant 0.50%S fuel over HSFO has fallen under 20%.

Still, Songa Container said the scrubbers it had installed had improved vessel attractiveness and they enjoyed high utilisation rates, helped also by the fact they could scrub down beyond the 0.50%S global IMO 2020 cap to also meet the 0.10%S sulfur cap required for compliance with major emissions control area (ECAs) rules.

"The Company maintains the expectation that a more normalised fuel market will develop in the post-COVID environment. As a consequence, it is expected that the profitability on the Company's scrubbers investments will improve in the future," it said.

Newport recommends two of its additive products as a solution to this problem: NP-HFO and NP-FOT.