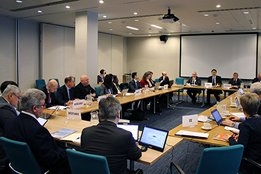 IMO says it stands ready to support PSC regimes in their efforts to enforce the new global 0.50% sulfur cap on marine fuel, particularly in respect to capacity building and training.

The comments, released today following discussions at a November 18 roundtable industry meeting hosted at IMO's London Headquarters, came after concerns were once again raised on the preparedness of  the PSC regimes to enforce the new sulfur limit.

"Specific training to support port State control for the implementation of MARPOL Annex VI could be provided. An IMO Workshop for PSC MoU/Agreement Secretaries and Database Managers will be convened in 2020, which would provide a further opportunity to promote the harmonization of enforcement measures," IMO said in response to the concerns.

The need for consistent enforcement to ensure a level playing field has been a constant message from the industry ever since the new cap was announced, but PSC regimes continue to highlight the barriers they face to do this.

Jodi Munn-Barrow, Secretary General at Caribbean MOU on Port State Control, in September highlighted several such issues ranging from lack of manpower to simply not having access to the appropriate tools to test compliance.

The company has signed a deal with Inatech to use its Bunkertech software.