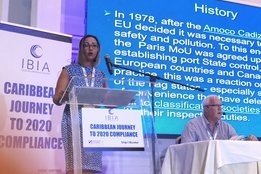 Perhaps most critically, many countries have not yet transposed the relevant IMO2020 rule into local legislation, rendering them unable to enforce.

Jodi Munn-Barrow, Secretary General at Caribbean MOU on Port State Control, told delegates that only 12 of the 19 members of the Caribbean MOU are signatories of MARPOL Annex VI which defines the sulfur cap rules.

"But this matter gets even worst. With respect to enactment of legislation, we only have six of 19 that have it in domestic legislation. So only six countries within the CMOU at this time can proceed to properly enforce port state control within the Caribbean with respect to MARPOL Annex VI," she said.

"That is a huge concern to us at this MOU. Why? The IMO guidelines clearly state that you cannot enforce port state control compliance on another party if you do not have it, and that's the major concern we have."

Many countries, unfortunately, have not transposed MARPOL Annex VI into national laws which limits the ability to do any effective enforcement

The situation should improve slightly by January 1, 2020, with Jamaica on track to have its local legislation in place for the start of the new sulfur cap.

Other issues faced by PSC authorities range from a lack of manpower to simply not having access to the appropriate tools to test compliance.

"The inspection rates are fairly low within the region, and unfortunately that is due to the low number of port state control officers throughout. Some of our member states have one officer - the Bahamas for example," Munn-Barrow explained.

Even when sulfur regs inspections are undertaken, getting fuel samples verified can be a challenge with few places in the Caribbean able to test them.

Mobile sulfur units cost about US $45,000, she added, a challenge to purchase for small island developing states that have very small budgets.

It remains to be seen how these barriers translate into noncompliance levels, although sulfur regs enforcement advocates Trident Alliance recently highlighted that a lack of enforcement does not mean signatories should not comply.

To that end, CMOU says awareness of IMO2020 among larger vessels has been good, but lacking for operators of smaller ships.

It is also unclear how many other regions face similar problems, but a lack of Annex VI legislation in local law could be particularly problematic.

While nations in Europe are required by law to have this in place, this is not the case elsewhere.

"Many countries, unfortunately, have not transposed MARPOL Annex VI into national laws which limits the ability to do any effective enforcement," said IBIA Director, Unni Einemo.

"You can still report [a noncompliant ship] to other port state control authorities which might then inspect the ship, but you can't necessarily do anything if you haven't got those laws in place nationally."

K Line to Work With Metals Firm EGA on Decarbonisation

The two companies have signed a memorandum of understanding on setting up a working committee for collaborative research on decarbonisation.