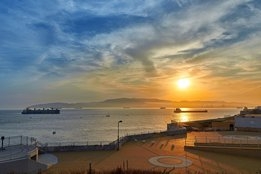 Ships in the Strait of Gibraltar. File Image / Pixabay

More bunker hubs have been hit with bunkering delays as the market wrestles with the switchover to IMO2020 grade fuels.

Ports in the Strait of Gibraltar and ARA market are the latest to be experiencing delays, although HSFO related delays in ARA have eased in in recent days, Argus reports.

As Ship & Bunker reported yesterday, Singapore is also facing such delays, with a report from Bloomberg indicating it is now taking about two weeks to book a barge rather than the usual five days.

Rahul Kapoor, the head of maritime research at IHS Markit in Singapore, told Bloomberg the market should expect “an extended waiting time” for bunkering.

The issue is less a lack of product, and more that suppliers are cleaning and preparing their assets to deliver the new lower-sulfur products.

"It's double congestion in Singapore - some vessels are laden with very low-sulfur fuel oil as a floating storage arbitrage play, and other vessels are waiting to load their fuel tanks with either low or high-sulfur fuel oil," Randy Giveans, an analyst at Jefferies in Houston was quoted by Bloomberg as saying.

There are also several reports of premiums being charged for prompt delivery which is adding to an already volatile landscape for price indications with unusually wide spreads.

"Visible black smoke" for more than three minutes will be punished.