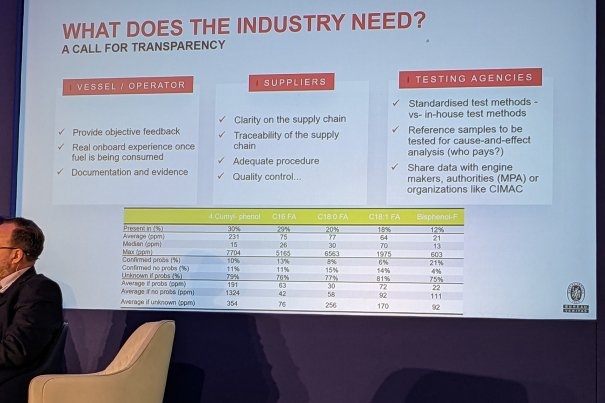 The bunker industry should focus more on sharing quality data, rather than widening the use of advanced GCMS testing, to avoid bunker contaminations like the ones seen in Singapore and ARA this year, according to a panel of experts at an IBIA event last week.

Speaking at IBIA's Mediterranean Energy and Shipping Conference in Malta last week, a panel of bunker quality experts suggested better data sharing would be key to learning more about contaminants.

Singapore reported fuel contamination problems with HSFO in February and March that resulted in about 80 vessels being damaged by chlorinated hydrocarbons in their bunkers. More recently, a similar contamination issue has been seen at the ARA hub in Northwest Europe, with phenolic compounds thought to be the culprit.

The problem is that no-one can tell you with confidence what type of components you can find in marine fuel.

But not enough is yet known about the full range of chemicals that might end up in marine fuels, and which might be harmful, to determine how to identify contaminations before they cause widespread damage, Charlotte Rojgaard, global head of marine fuel services at Bureau Veritas bunker monitoring unit Verifuel, said at the conference.

"The problem is that no-one can tell you with confidence what type of components you can find in marine fuel," she said in the panel session.

"Let's say hundreds of thousands of components could be in marine fuel; no-one has mapped marine fuel, no-one has done that on a regular basis over a long period of time and got the feedback.

"If you find 50ppm of styrene, is that harmful?

"Very often, it seems that the only option left is to debunker based on the presence of 50ppm of some component, and no-one can tell you if it's harmful."

With more data-sharing from everyone involved in the bunker supply chain, testing firms and regulators, more could be learned about which components will need to be avoided.

The big question, especially in the latest episode with the presence of chlorine, is where is the origin.

"There is a need for transparency; bunker stemming is not particularly easy, because shipowners do not necessarily stem the bunkers directly with the physical supplier," Danny Chua, senior partner at law firm JTJB, said in the panel.

"The big question, especially in the latest episode with the presence of chlorine, is where is the origin.

"Of course, every vessel that receives any contaminant is one too many."

Wider -- or even mandatory -- use of GCMS testing has been suggested as a way of preventing similar problems from emerging. A survey from brokerage NSI in April found there may be widespread support among bunker buyers for making GCMS testing mandatory.

"I would say it's a matter of interpretation," Rojgaard said.

"On a routine basis, I would not advise it.

"I'm happy to do it -- I make a lot of money on it -- but from a more protective, proactive approach, I don't think it provides much benefit to the industry.

"It's more a test that I would like to recommend on an investigative basis once problems have occurred."

We need to find a way to develop a robust, fit-for-purpose methodology, ideally into an international standard, although I think that's a fair distance away.

"If you're faced with a Clause 5 claim, you have to take a breath and ask yourself, what was not found in the GCMS?

"And then is the component only found in fuels that cause problems, or it it present in non-problematic fuels?

"We need to find a way to develop a robust, fit-for-purpose methodology, ideally into an international standard, although I think that's a fair distance away, but until that at least some form of database.

"We need to get into a situation where we're objective about the compounds that we actually find."

Verifuel's Charlotte Rojgaard is due to speak at the IBIA Annual Convention 2022 in Houston November.

The lubricants line is a natural extension of our product capabilities, it says.

USTC's Global Risk Arm to Have Bigger Role Within Group

GRM to move out of Bunker Holding's orbit to become an independent entity within the group.

The chairmen of China Merchants Energy Shipping and COSCO Shipping Bulk met this week to discuss their two firms' cooperation and views on decarbonisation.