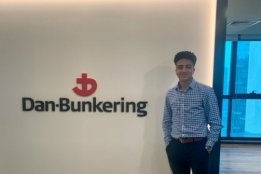 Labib was hired to the role after completing a three-month internship with the firm in Houston. Image Credit: Kerolos Labib

Kerolos Labib will join the firm's Dubai office as a bunker trader as of October, he said in a LinkedIn post on Thursday.

Labib was hired to the role after completing a three-month internship with the firm in Houston.

"I'm so excited to start my bunker trading career along side these amazing traders in the ambitious and beautiful city of Dubai," Labib said in the post.

"Big thanks to all the amazing traders in the Houston office that helped me kick off my journey and taught me so much during my internship."

The company is based in Middelfart, and has 11 offices worldwide.

But some analysts see a full demand recovery next year.

Singapore's GCMD to Work With Gard on Maritime Decarbonisation

The two organisations have signed an impact partnership agreement committing to five years of collaboration.