IBIA: The Future is Ours 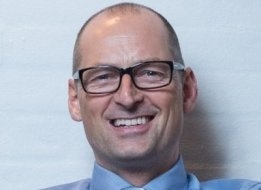 Henrik Zederkof has served on IBIA's board since 2016. Image Credit: IBIA

The future of our industry complex and the uncertainty can sometimes be overwhelming as the path forward seems blurry and confusing with the many roads towards a greener and more digitalized future.

However, this complexity will be the accelerator of our industry for transforming it to the next level beyond IMO's 2030 and 2050 greenhouse gas (GHG) emission reduction targets, toward the ultimate goal of carbon neutral transportation.

During the next decade, we will be part of a transformation that will change the bunker industry forever and bring us fast forward to the future where green solutions will be key for worldwide sea transport.

To cope with such a large transformation, we have in IBIA been preparing for some time, working on three major areas of focus:

I am delighted to say that all three areas have had a lift-off during the past six months, despite the COVID-19 challenges, and that IBIA is moving faster than ever before on those areas with the clear ambition of preparing IBIA as an organisation to guide, gather and influence our industry towards the future.

IBIA remains the voice of the bunker industry at IMO – the UN organ for maritime affairs – where IBIA's director Unni Einemo has raised our concerns and points of view and made an effort to influence the future for our industry where it really matters.

The work and effort that the IBIA working groups, secretariat and a wide range of members put into the preparation and understanding of the complex, political and highly sensitive discussion at the IMO is a huge inspiration for me as IBIA chairman. I am again and again amazed by the quality of the work IBIA is capable of bringing to the table at IMO.

This unique position that we in IBIA have worked for and today fulfil on behalf of the bunker industry is something that we will continue to focus on as the decisions that IMO takes will have a large influence on all our businesses, hence the importance of continuing the dedicated work that IBIA does at IMO.

The process of establishing IBIA regional boards is  organization well underway. Presently, the global board is reviewing the proposal to establish an interim regional IBIA board for Africa and we expect to be able to launch this during July 2021.

In Asia our interim regional IBIA board has been active for more than a year with great success. The regional board has proven to us all that with the right local involvement, IBIA can bring even more value, both for the region and  the overall work and influence at IBIA, as the distance from the regions to the global board has become much shorter. IBIA, as a membership-based organization, has benefitted greatly by this development.

Next in line will be the Americas where we are getting closer to taking a decision on the regional interim board.  This work is led by Adrian Tolson with strong assistance from Eugenia Benavides, Nicolas Vukelja and Steve Simms, who are all members of the IBIA global board. With these people we are confident that we have a very capable team on this task.

We trust that we will be able to share further updates about progress with the interim regional board for Americas at the IBIA Conference on 1-2 September this year.

The IBIA working groups have always been a fundamental part of the value that IBIA has provided its members.

Recently we have launched two new dedicated work groups, who together with our existing Legal working group all work on dedicated tasks that support IBIA's three focus areas.

One of these is the Future Fuels working group that will support IBIA's ambition to manage the GHG challenges for the shipping industry. The chairman of this working group is IBIA board member Constantinos Capetanakis of Star Bulk and many IBIA members have volunteered to participate in this important work.

The other is the IBIA Bunker Licensing & MFM working group, where we have been fortunate to have Alexander Prokopakis, the CEO of ProBunkers, taking the helm as chairman.

Both groups are off to a roaring start and when I look at the members who have joined the working groups, I feel that we at IBIA can be very proud of both the diversity among the members and the power in these working groups. This confirms that IBIA's influence and position in the industry is second to none.

Finally, one of the largest and more complex assignments is the transformation of IBIA to have both a global board and regional boards.  IBIA's  board members are determined to ensure that the future will be based on a fair and transparent election process for both the regional and global boards, and we have given this difficult task to the Legal working group.

Once again, I am positive when I see the list of the members who are already engaged in this. The legal capacity and geographical reach are impressive, and I am confident that our Legal working group will be able to overcome the challenging task ahead of them.

The IBIA working groups are one of many of our membership offerings where we see IBIA adding value both for those who actively participate in the working groups and for all members. When sharing conclusions and findings from our working groups with the members, or the results become part of IBIA politics and future direction; that is where we experience that we are adding value.

I want to thank all the members and chairmen of our working groups for your efforts. It is your work that forms a large and important part of the direction of IBIA and continues to make IBIA relevant and influential in the industry.

I am confident that the future will continue bringing us challenges, but with a strong platform, we can ensure that IBIA members with different views and background can meet and learn from each other and together better overcome whatever we will be faced with in the future.

The hearing will be held at Singapore's High Court at 10am local time on August 16.

The firm has recently launched the operation and now offers 'comprehensive coverage' across all locations at the Amsterdam-Rotterdam-Antwerp hub in Northwest Europe.

The panel is part of the second half of IBIA's Bunkering & Shipping in Transition Conference, being held online on September 1-2.