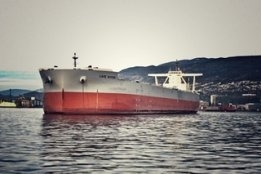 Ships looking to blend any remaining HSFO onboard after the 0.50% sulfur cap comes into force,  rather than debunkering it, could face running into compliance problems.

The so-called IMO2020-rule comes into force on Wednesday, after which only vessels with a valid exception such as those fitted with a scrubber will be able to burn HSFO.

"This situation has prompted some members to ask whether it will be possible to blend the non-compliant fuel on board in order to achieve compliance and thereby avoid the very costly process of de-bunkering and potential loss of value of the non-compliant fuel oil," BIMCO's Christian Baekmark Schiolborg wrote in a note on the BIMCO website.

The issue, he says, is that the Bunker Delivery Note (BDN) is the legal proof of the bunker's sulfur content.

In the event of a compliance check, any vessels blending onboard may have no way to show authorities they were complying with the new cap.

Further, a complete ban on the carriage of HSFO comes into force from March 1, 2020.

More on the interpretation of the BIMCO Secretariat can be found here: https://www.bimco.org/ships-ports-and-voyage-planning/environment-protection/2020-sulphur-cap/regulatory-and-technical/20192012---on-board-fuel-blending

The company expects to own and operate six vessels running on ammonia by 2030.