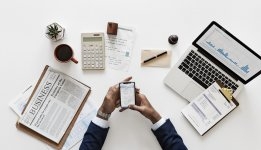 Dropping the global sulfur cap on marine fuel from 3.5% to 0.5% represents a challenge to both shipping and refining.

That challenge means market uncertainty of which signs are already visible leading some hedge funds to see opportunities ahead.

"Rarely you see such a potentially massive disruption," managing partner John Kartsonas was quoted as saying by Reuters.

"Delays, a reduced active fleet supply, slow steaming and port congestion can push freight rates to decade highs, and beyond," he said.

This is the largest regulatory change in the oil space ever

Another investment player hoping to benefit is Svelland Capital with its "IMO direct exposure fund" aimed at investors who want to take positions based on IMO2020, but are less familiar with oil derivatives.

"This is the largest regulatory change in the oil space ever and it will have a massive effect far outside of shipping," the fund's portfolio manager, Kenneth Tveter, was quoted as saying.

China has already noted emerging opportunities by setting up a low-sulfur futures contract.

The report goes to detail other financial initiatives based on IMO2020 including from asset manager Robeco and hedge fund CF Partners.

Mercuria has agreed to buy a 61% stake in US alternative fuels supplier Beyond6.