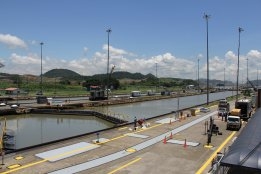 Bunker sales figures for Panama showed a similar pattern to Singapore in February, gaining from the same month a year earlier but declining from January's levels.

Total sales jumped by 18.5% from a year earlier to 436,066 mt last month, according to preliminary data from the Panama Maritime Authority (AMP), but slipped by 8.6% from January's figure.

A total of 604 ships were bunkered in Panama in February, down from 725 in January, meaning the average stem size gained 9.7% on the month to 722 mt per ship.