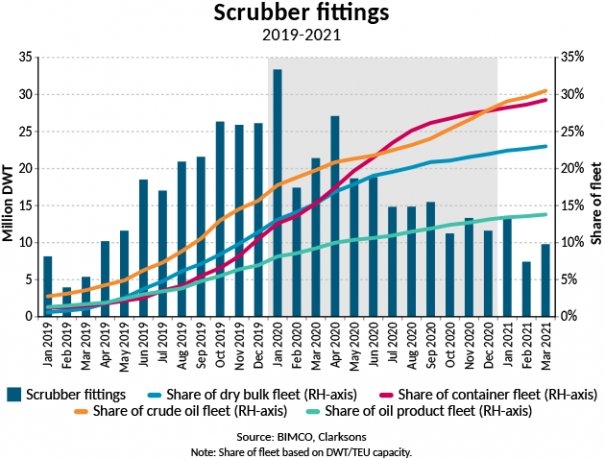 A second wave of scrubber retrofits following the rush around the IMO 2020 transition is 'unlikely', according to shipping industry body BIMCO, despite a strong economic case.

In a research note on the organisation's website on Thursday Peter Sand, its chief shipping analyst, noted the recent rise in HSFO sales driven by continued installation of scrubbers.

"After the quick adjustment to the global sulphur cap, the decline in HSFO’s share of total bunker sales has stopped," Sand said.

"Although its share is much lower than any time prior to Q4 2019, the steady rise in scrubber-fitted ships has supported demand for HSFO and will remain until new solutions and future fuels are widely introduced on the industry’s path to decarbonisation."

Scrubber systems have seen improving profitability this year as the price spread between VLSFO and HSFO widens. The spread for Singapore was at $107/mt on Thursday, according to Ship & Bunker pricing, up from a low of $48.50/mt in April 2020 after last year's crude-price crash.

"As demand for products such as jet fuel starts to recover, the HSFO-LSFO spread may well increase, solidifying the economic case for scrubbers," Sand said.

But scrubber manufacturers should not hold their breath for a new wave of retrofit orders, he added.

"A return to the high levels of scrubber installations that we saw at the end of 2019 and start of 2020 is however unlikely, as the majority of owners who wanted to retrofit their ships have now done so," he said.

"The majority of scrubbers being added to the fleet now come from newbuilds."

The firm is also looking to buy its own bunker delivery vessels, and will seek to expand into LNG bunkering once its conventional fuel business has been established.

The vessel completed its sea trials in four days.