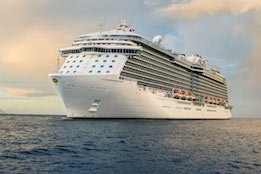 The U.S. Department of Justice (DOJ) Wednesday announced that a federal judge in Miami has imposed a $40 million penalty – the largest-ever for crimes involving deliberate vessel pollution – Princess Cruise Lines Ltd. (Princess) related to illegal dumping overboard of oil contaminated waste and falsification of official logs in order to conceal the discharges.

As Ship & Bunker reported in December, Princess, a subsidiary of Carnival Corporation & plc (Carnival), was set to plead guilty to seven felony charges related to the deliberate dumping of oily waste from its vessel the Caribbean Princess and pay the associated $40 million penalty.

Further, through a plea agreement, Princess was to plead guilty to the use of a so-called "magic pipe" for oily waste dumping and the related and intentional cover-up.

On Wednesday, U.S. District Judge Patricia A. Seitz ordered Princess to pay the penalty and put the company on probation for a period of five years.

During the probation period all related Carnival cruise ship companies trading in the U.S. will be required to implement an environmental compliance plan that will include independent audits by third party and oversight by a court appointed monitor.

"As a result of the government’s investigation, Princess has already taken various corrective actions, including upgrading the oily water separators and oil content monitors on every ship in its fleet and instituting many new policies," said DOJ.

Seitz also ordered that $1 million be awarded to the British engineer who first reported the illegal discharges.

Hapag-Lloyd is temporarily not accepting any cargo to and from Beirut.

Is the second major player this week to pull back on its trade financing.