2020 Noncompliance May Play an Important Role in the Industry's Response to New Regs: Report 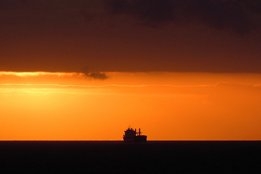 The report says enforcement of the new cap, particular on the high seas, is a daunting challenge. File Image / Pixabay

The risk of noncompliance with the upcoming 0.50% global sulfur cap on marine fuel is "significant" and is likely to have been underestimated by forecasters looking to predict the impact of the new rules set to come into force in 2020, according to a new report released today.

On the upside, noncompliance may well play an important part of the industry's response to the new rules as it could help keep demand and price spikes for compliant fuel in check, the report adds.

"Forecasts of a tight diesel market give short shift to shippers' option of last resort: noncompliance. Unattractive as it might seem, noncompliance may play an important role in the shipping industry's response to the new rules—especially in view of the IMO's absence of enforcement capability on the high seas," the report says.

The finding was one of several conclusions from Slow Steaming To 2020: Innovation and Inertia in Marine Transport and Fuels, released today by The Center on Global Energy Policy (CGEP) at Columbia University and authored by CGEP Senior Research Scholar Antoine Halff.

Given the lack of environmental police on the high seas, enforcement is a daunting challenge for the global cap's implementation

For the record, IMO has yet to reveal its plans as to how the new cap will be enforced, but last year, Anna Larsson, Chair of the Trident Alliance, said there was a "sea of question marks" over the matter that was critical to the success of the rules.

The report notes that larger companies will likely comply with the new cap regardless as they will be wary of the reputational risks noncompliance could bring.

Thanks to their economies of scale, those companies will also be in a better position than smaller operators to shoulder the cost of compliance, the report says.

As a case in point, Alex Hjortnæs, Senior Newbuilding Manager at Dampskibsselskabet NORDEN A/S (NORDEN), recently told Ship & Bunker that the enforcement landscape would "not play a part" in its decisions on how to comply with the new cap.

However, when it came to smaller vessels, the report says there is a "strong likelihood of noncompliance on the high seas" because the ability to enforce the new rules is incredibly difficult.

There is also a lack of a credible deterrent, the report says, while also noting that "inspections and fines for noncompliance in ECAs, where enforcement is a far lesser challenge, have remained exceedingly rare and inconsequential."

Despite ongoing efforts to address it, the problem of verifying compliance with the global SOx cap remains fundamentally unresolved

"Given the lack of environmental police on the high seas, enforcement is a daunting challenge for the global cap's implementation. Efforts to beef up enforcement currently focus on tightening paperwork checks at ports, which is a cheaper but less effective approach than actual emission checks by flyover or satellite."

One factor exacerbating the enforcement problem, the report notes, is the fact that the new rules are a performance standard rather than a technical one.

That is, the rules require vessels to use a marine fuel with a maximum sulfur content of 0.50%, or permit the use of otherwise noncompliant fuel in conjunction with an exhaust gas scrubber or similar technology to achieve an equivalent method of compliance.

"Performance standards like the global sulfur cap are inherently challenging to enforce, compared to technical standards. In the case of the sulfur cap, the challenge is particularly overwhelming, given the technical difficulty of tracking air emissions from a ship at sea and the complete lack of any credible enforcement authority on the high seas," the report says.

"Despite ongoing efforts to address it, the problem of verifying compliance with the global SOx cap remains fundamentally unresolved."

The full report can be found here: http://energypolicy.columbia.edu/publications/report/slow-steaming-2020-innovation-and-inertia-marine-transport-and-fuels