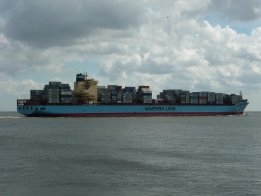 Shipping giant AP Moller-Maersk has appointed an executive responsible for evaluating future fuels as the company seeks to shift its more than 10 million mt/year of bunker consumption to zero-carbon alternatives.

The firm has appointed Maria Strandesen as its head of future fuels, according to an update to her LinkedIn profile.

Strandesen was previously a senior innovation portfolio manager at Maersk.

"The goal is to convert the entire fleet of approximately 750 vessels to a fully carbon-neutral fleet as fast as possible."

Last month Maersk announced it would only be ordering dual-fuelled ships capable of running on zero-carbon bunkers from now on. The firm plans to have its first carbon-neutral ship by 2023, a 2,000 TEU feeder vessel running on synthetic or bio-methanol.

Conventional fossil LNG is unlikely to be compatible with the shipping industry's longer-term plans to eliminate carbon emissions.