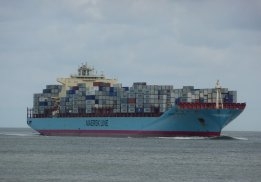 Shipping giant AP Moller-Maersk is one of the largest corporate consumers of oil on the planet, and has set itself the target of becoming carbon-neutral in the next three decades.

The company's boxships got through 10.3 million mt of bunker fuel last year, taking up about 4% of total global marine fuel demand.

Maersk has been relatively quiet on its decarbonisation plans thus far, while rivals like France's CMA CGM have made big moves into LNG bunkering. But this week the firm announced it would only be buying vessels capable of burning zero-carbon fuels from now on.

Its first ship capable of running without carbon emissions will be a 2,000 TEU feeder vessel, which it aims to be operating by 2023 burning bio- or synthetic methanol.

"We're looking into different options for the future, and we basically believe in alcohols, of which methanol is one, we believe in ammonia," Morten Bo Christiansen, head of decarbonisation at Maersk, said in an interview with Ship & Bunker this week.

The reason we are going with methanol on the first one is that we can.

"The reason we are going with methanol on the first one is that we can.

"It's the most flexible from a technology perspective; we can get an engine that can burn it, and there's already experience of it in the marine environment."

This gives the company between two and three years to develop a supply chain for green methanol.

Methanol bunkering is still in its infancy as an industry. One of its biggest developments was the conversion of a large ro-pax ship, the Stena Germanica, to run on methanol in 2015. But few ships have followed suit since then, apart from those carrying methanol cargoes.

The ships currently running on methanol are using a product made using natural gas, with no particular environmental advantage over LNG, and the synthetic and bio-methanol that Maersk will soon want in large quantities is not yet commercially available.

"This is the biggest challenge, in relation to this," Christiansen said.

"The market for really carbon-neutral methanol is basically not existing.

"We are in dialogues with different partners, both in regards to bio-methanol and e-methanol."

The company will then need to evaluate the various alternative fuels available to it in the coming years as it renews its fleet, buying only ships with duel-fuel systems that can burn carbon-neutral bunkers as they become available.

When you look at the manufacturing dynamics, it looks as if ammonia will be the cheapest on average.

"When you look at the manufacturing dynamics, it looks as if ammonia will be the cheapest on average.

"On the other hand, in terms of handling and operating the vessels, methanol is clearly going to be cheaper, because it is easier to handle.

"But there could be breakthroughs in some of these technologies that could change that picture."

The company does not see methanol as just a transition fuel to be used for a few years until better zero-carbon options reach maturity.

"If the stars align and things turn out as we hope they would actually be, [methanol-fuelled ships] could be a cost-competitive alternative," Christiansen said.

"Five or ten years down the road, things may look different.

"There may be new technologies; hydrogen might come off as a feasible marine fuel also.

"But for now we are planning at least to have both methanol and ammonia."

The ships the company orders in the coming years will not need substantial alterations to make them compatible with zero-carbon fuels, Christiansen said.

"The vessels that we are working on now -- those engines are to a large extent the same, but there is something around the fuel systems, and around the tanks and so on," he said.

"But they are still combustion engines; it is a well-known technology."

The cost of the ships should also not rise too much.

On the investment in the ship itself -- it is a bit more expensive, but actually only marginally.

"On the investment in the ship itself -- it is a bit more expensive, but actually only marginally," he said.

"In terms of the overall capex and investments needed to renew our fleet, it will make it slightly more expensive, but it's very manageable.

"The main additional cost will come on the cost of the fuel."

Here the company will inevitably face much higher bills. Christiansen said the price for transporting a container with zero-carbon fuels may be broadly comparable to that of its 'Eco Delivery' service, for which its customers pay extra to claim their container's share of Maersk running some of its ships on biofuels rather than conventional bunkers.

"When I look at what it means in additional price for a 40-foot equivalent container, I would say it's actually within reasonable range of what we already have out for our customers for the current Eco Delivery product," he said.

"And if you factor it all the way through to the end consumer, whenever you buy a pair of trainers or a flat-screen TV, then actually we are talking cents rather than extra dollars."

LNG Remains Off the Cards

One fuel option that appears to have been ruled out entirely is LNG.

[LNG is] a fossil fuel; it just doesn't solve the problem.

"It's a fossil fuel; it just doesn't solve the problem," Christiansen said.

"And if you do the analysis, it can actually be worse than burning bunker, because of the methane slip.

"Fundamentally it's another fossil fuel, and we don't want to invest in more fossil fuels."

That said, bunker industry watchers with long memories may recall Maersk's initial strong scepticism towards scrubbers -- likening them to running an oil refinery within the ship -- before becoming one of the larger buyers of the emissions-cleaning systems later on. 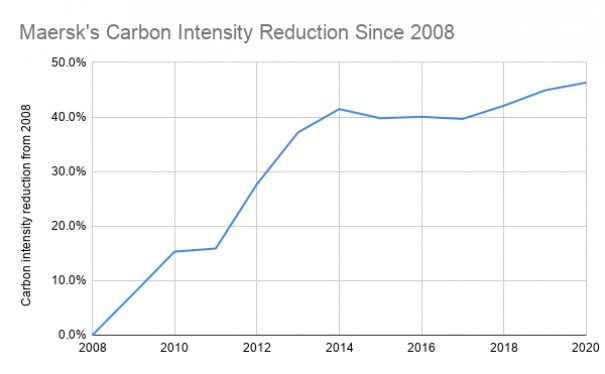 Maersk had already eliminated much of its 2008 levels of carbon intensity by 2014. Image Credit: Ship & Bunker / Data Credit: Maersk

While Maersk has not talked much about its decarbonisation plans before this week, it has already made significant strides towards cutting down on its emissions.

The company is now looking to the digital realm to help it make additional cuts to emissions, Christiansen said.

"It's actually more of a technology game, where we invest in installing sensors and technology on our vessels so we can monitor fuel consumption almost in real time," he said.

"We are in the process of rolling that out.

Once you start applying algorithms and technology we believe there's more to be had in optimising the fuel consumption.

"Once you start applying algorithms and technology we believe there's more to be had in optimising the fuel consumption."

The company is less hopeful of making the rapid progress it achieved early last decade as its average vessel size grew -- the company's fuel consumption per tonne-mile had fallen by 41.4% from 2008's levels already by 2014 -- but it remains confident that further savings can be found.

"I think it's pretty clear that the introduction of the very large vessels in the 2010s really moved it fast," Christiansen said.

"It's getting harder and harder now; there are no low-hanging fruits.

"We will rely more and more on digital technology. But it goes without saying that with the fuel bill we have, we are highly incentivised."

After arrest it can take as much as a few weeks for the ship to be released.