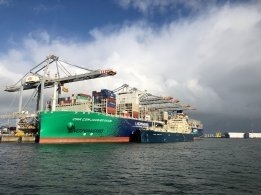 The ship was bunkered at Rotterdam last week. Image Credit: Port of Rotterdam

A single bunker stem took up almost a quarter of the total LNG bunker demand at Rotterdam for the last three months of 2020.

In the first bunkering of the CMA CGM Jacques Saadé at the Dutch port in November, Total supplied the ship with 17,300 m3 of LNG, including some biogas.

That amounted to 24.5% of Rotterdam's total LNG bunker demand in the fourth quarter, according to the latest data from the port authority. The stem was 8.2% of total demand for the whole of 2020.

These statistics serve as something of a rejoinder to the regular reports in recent years of surges in LNG bunker demand. While it is true to say the nascent LNG bunker industry is growing rapidly, it remains a niche corner of the whole market, and is unlikely to overtake even the small market for HSFO supply to ships with scrubbers for at least a decade.

Rotterdam's LNG bunker sales of 210,334 m3 last year were about 2.2% of the size of its total conventional bunker volumes.

Contrary to market chatter, exits not connected to earlier BH decision to shut LQM London office; "We have actually hired a number of people as well," adds CEO Søren Høll.

Methanol bunkering is still in its infancy as an industry.

Ammonia is 'Ideal' for Ferries: DFDS

The company has joined the Power-to-Ammonia project seeking to develop a green ammonia production facility in Denmark.