LNG Bunkers Get Nod from Nor-Shipping as Future Bunker Fuel 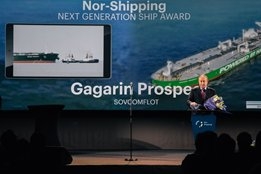 While some skeptics are yet to be convinced of LNG's credentials to become the bunker fuel of the future, Nor-Shipping today added its endorsement to the those who think it will by electing Sovcomflot's LNG-fuelled Aframax crude oil tanker Gagarin Prospec as recipient of the Next Generation Ship Award 2019.

The award is designed to focus on innovation to honor the most promising design for ships that will be at sea in the coming decade, Nor-Shipping says.

"Today, the shipping industry steadily transforms itself to become increasingly more sustainable, and we are proud that Sovcomflot is amongst those who lead this process," said President & CEO of Sovcomflot, Sergey Frank, upon receipt on the award.

"The switch to using LNG as a fuel could significantly contribute to reducing human impact on the environment. We firmly believe that adopting LNG as a primary fuel for large-capacity tankers is the right move."

While there is no question that LNG reduces many emissions compared to burning oil-based bunkers, skeptics such as 2020 US Presidential hopeful Jay Inslee are among those who believe the move LNG it is not a big enough step forward to address climate change.

Advocates insist otherwise, with a recent 'well-to-wake" study commissioned by pro-LNG bunker groups SEA/LNG and SGMF concluding the gas fuel can provide GHG savings of up to 21% compared to oil-based bunkers.

Energy giant Shell bunkered Carnival Group's cruise ship the Costa Smerelda at the French port on May 4 using its barge the Coral Methane.

The supplier says it has chartered the 13,000 cbm capacity Tosna Star to supports its new service.