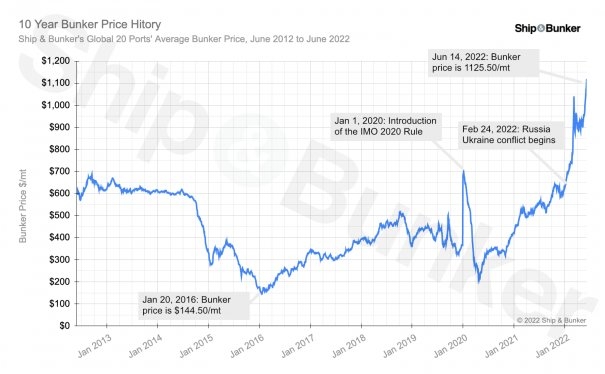 • Bunker prices at key bunkering hubs hit historical high of $1,125.50/mt
• Marine fuel costs have risen 679% over the past 7½ years
• Price jump this year larger than during any previous event over the last decade

This month Ship & Bunker marks its 10 year anniversary of publishing marine fuel-focused news, bunker prices and industry analysis. The milestone provides an opportunity to analyse this year's record price surge in comparison with previous major events of the past decade.

When considering historical bunker prices, we must take into account that IFO380 was the dominant bunker choice prior to January 1, 2020 and VLSFO afterwards. The above graph, and this analysis, uses combined prices on that basis from Ship & Bunker's "G20" average bunker price index for 20 leading global bunkering ports.

over the last 7½ years bunker prices have risen 679%

This year's surge has been largely driven by the Russian invasion of Ukraine, with Russia's oil exports slowly being phased out of much of the global market. Also playing a role is the steady increase in activity at Asian ports as they recover from the COVID-19 era.

It's worth noting that as well as prices being at record highs, this year's rate of increase in prices has also surpassed many traumatic market events seen over the past decade that were occasion to much more concern and debate in the industry.

The current strength across multiple shipping segments, with containers in rude health since the COVID-19 pandemic emerged and dry bulk and tanker markets boosted by Russian-flagged vessels being blocked from much of the international trade, means 2022's price rises have been swallowed without major complaint from the shipping industry thus far.

Equally, the 2020 crude price crash took only 45.8% off the G20 average VLSFO price between the first and second quarters of that year.

And because of that crash, after the introduction of the European 0.10% sulfur ECA in 2015, shipowners at Rotterdam were paying on average 9.7% less for MGO at the Dutch port in the first quarter of 2015 than they had been for HSFO in the same period a year earlier.

"Of all the biggest moments of market turmoil analysed in these pages over the past decade -- from IMO 2020, the various crude crashes and rallies, to the introduction of Emissions Control Areas (ECA) -- the fact that the current price jump has been at a much larger scale highlights just how challenging the current market conditions are," said Martyn Lasek, managing director of Ship & Bunker.

"With the industry now at the start of its decarbonization journey we no doubt face many more significant moments of disruption ahead. Readers can count on Ship & Bunker to continue providing its critical insights and coverage when they do."

Launched in June 2012, today Ship & Bunker is trusted by over 60,000 individual users every month.

Ship & Bunker would like to thank all of our readers, partners, and sponsors for helping us reach our milestone 10 year anniversary.

But analysts say market is too tight for more losses to occur.