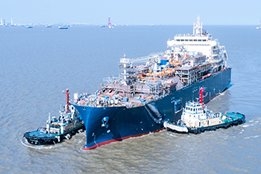 Total has launched its first mega-LNG bunkering vessel, in what is unquestionably a watershed moment for gas bunker advocates.

The yet-to-be-named ship will be delivered in 2020 and enter service in Northern Europe.

With a capacity of 18,600 cbm it will be he the world's largest LNG bunkering vessel by a considerable margin; it is more than twice the size of the current title-holder, Nauticor's 7,500 cbm capacity Kairos.

Total's LNG bunkering vessel is a key part of CMA CGM’s plan to operate the world's first ultra-large containerships powered entirely by LNG. The carrier has nine such vessels entering service and in 2017 signed a 10 year, 300,000 mt per annum LNG bunker supply deal with Total.

The vessel was built by Hudong-Zhonghua Shipbuilding at their shipyard near Shanghai.

Having been in discussions since 2017, the pair have now signed a 10 year deal.

"The concern is that this is just the sign of things to come," says ClipperData's Matt Smith.