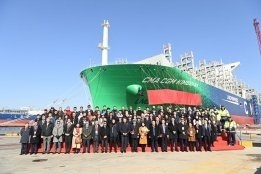 A record total of 240 LNG-fuelled ships were ordered last year, according to classification society DNV.

Just two more gas-powered ship orders were made in December in a slow end to the year, but the annual total was still significantly higher than in previous years, the company said in a LinkedIn post on Wednesday.

"The 2021 count ended at a net increase of 240 ships, more than the previous four years combined," Martin Christian Wold, principal consultant at DNV, said in the statement.

"And this in spite of LNG bunker fuel reaching completely unforeseen high price levels all through the second half."

But LNG bunker prices went on a record surge last year. LNG priced in fuel oil terms at Rotterdam ended the year at $1,396/mt, according to Ship & Bunker pricing sourced from gas supplier Titan LNG, a rise of 325% from the $328.50/mt seen at the end of 2020 and having hit a record high of $2,053/mt earlier in December.

Chemoil Terminals in the US is set to be renamed Olympus Terminals.

The EU is partly subsidising the research.

The new service will cover the bunker needs of both firms as well as seeking third-party customers.