IMO2020: Bunker Traders Coming Back in a Big Way 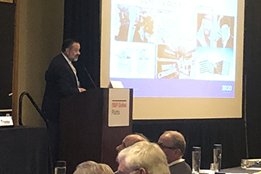 Bunker traders are set to make a big comeback in 2020 because there is simply no-one else to fill the multi-billion dollar credit hole the new sulfur rules will create.

How big of a hole will that be? $4 billion per month of addition credit on 30 day terms, 20|20 Marine Energy Director, Adrian Tolson, told delegates gathered at the recent 16th Annual Bunker and Residual Fuel Conference in Houston.

"The shipping industry is a pretty damaged entity that has been going through 11 and a half years of misery now," he said.

"There is a handful of maybe 25-30 big companies that almost any supplier will give credit too but the rest of the buyers will not get credit, which creates the need for the specialist bunker trader."

Perhaps worryingly, Tolson says that despite news of traders boosting their credit lines he believes they still will not be able to cover the shear volume of additional credit needed for 2020.

"There's got to be someone else who steps into the process to make sense of this. Alternatively, margins just increase dramatically which makes the bankers a lot more excited by these guys, or we get shorter credit terms," he said.

"But new bunker credit providers could also come along."

Change in the Supply Chain

The shift comes as part of a wider shake-up for the marine fuel supply chain that will see Majors/Refiners become the dominant physical suppliers while independents and commodity traders will be the biggest losers, he predicts.

Do these new suppliers, the majors and refiners, want to be in the retail business and give credit to buyers? The simple answer is no

"The bunker traders are back," Tolson declared.

"They were disintermediated as a result of the OW collapse and guess what, they'll come back to probably the same level as they were before, reasserting their control over the market and it should be very profitable for them."

While the bunker trader will become the most significant final seller to the shipowner, it is the Majors/Refiners that will physically supply the most fuel.

"Do these new suppliers, the majors and refiners, want to be in the retail business and give credit to buyers? The simple answer is no," Tolson noted.

Losing out will be the independents and commodity traders, who Tolson estimates current physically supply half the market at 150 million mt, and sell 125 million mt.