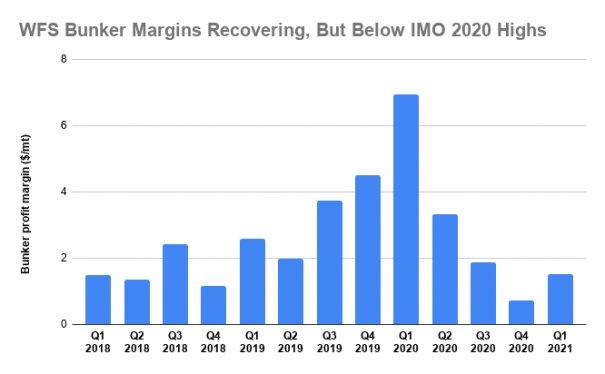 Fuel supplier World Fuel Services saw its bunker margins and volumes sink on a yearly basis in the first quarter, falling from the highs of the IMO 2020 transition.

The company reported net profit of $6.4 million from its marine division in the first quarter of 2021, down by 81% from the $33.9 million seen a year earlier, it said in quarterly results released late on Thursday.

The company's bunker sales volume shrank by 13.4% on the year to 4.2 million mt.

The declines "were principally driven by the strong results we saw in the first quarter of 2020, related to the IMO transition to very low sulfur fuel," Ira Birns, chief financial officer at WFS, said in a call with analysts on Thursday.

You're comparing to an extraordinary Q1 [2020], when the IMO implementation happened.

"You're comparing to an extraordinary Q1 when the IMO implementation happened."

During the first quarter of 2020, while VLSFO blending recipes and supply chains were something of an unknown quantity to bunker buyers, suppliers were able to impose a hefty delivery premium for the new fuels and saw healthy profits as a result.

The company's bunker margin of $6.93/mt in the first quarter of 2020 was its highest since at least the third quarter of 2014, the earliest quarter for which the numbers are available.

Burns noted a quarter-on-quarter rise in the company's marine net profits -- a gain of 106% since the fourth quarter of 2020.

This was "related to the strong results of our physical operations," he said.

The firm expects an improving outlook this year.

"As we look ahead to the second quarter for marine, based on what we experienced through the first few weeks of April, we expect marine gross profit to increase sequentially, driven by improvement in our core resale business activity," Birns said.

"And as we look to the latter part of the year, there's increasing likelihood that cruise lines will begin sailing again. providing opportunities for additional improvements in the fourth quarter and into 2022."

The almost total absence of cruise ships from the global bunker market over the past year has been a major blow to WFS. The firm is based in Miami, one of the world's largest hubs for the cruise industry.

Cruise vessels have historically delivered 10-12% of the company's gross profits from its marine division, Birns said. In the past the industry typically took up about 4% of global bunker demand.

"It should start coming back around the end of the year," Birns said.

"But just because you're sailing in the fall, if that's going to happen, the number of ships is going to be nowhere where it was pre-pandemic.

"It's going to be a relatively slow ramp for that business, unfortunately."

Industry body IBIA has sent out a survey to its members on behalf of CE Delft this week investigating potential bunker quantity shortfalls at Rotterdam and Antwerp.

And aims to supply ships in regional ports.

Mandates to fix prices have been tried before: Jorge Montepeque.