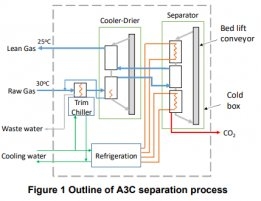 Carbon capture technology may deliver greenhouse gas (GHG) emissions cuts for the shipping industry at around half the cost of using zero-carbon fuels, according to new research from the UK.

Engineering consultancy Houlder has partnered with PMW Technology to produce a new study on the potential for carbon capture in the shipping industry. The research concludes that shipping's carbon emissions could be removed at a cost of £85-120 per tonne of carbon dioxide equivalent ($108-153/te CO2), compared with a cost of £180/te CO2 for shifting the industry to running on ammonia.

In an interview with Ship & Bunker earlier this week, Jonathan Strachan, director for ship design and engineering at Houlder, and Paul Willson, director at PMW, discussed the potential advantages of carbon capture and how it would work.

The bunker tanks and the rest of the infrastructure on board the vessel remains the same.

"The marine engines that have been developed over many years are efficient and can continue to be used in the same format that they are now, pretty much," Strachan said.

"The bunker tanks and the rest of the infrastructure on board the vessel remains the same."

The technology used for the purpose of the study involves cooling the ship's exhaust to around -100⁰C to separate out the carbon dioxide and then dispose of it at port.

"Carbon capture shore infrastructure is also shared with industry, so that investment and operating costs are reduced," Strachan said.

"New ammonia capacity will all be dedicated to shipping -- at a cost."

The research takes as case studies a car carrier operating between Europe and America and a ferry operating on the south coast of England. For the car carrier the cost of the equipment was estimated at £7-12 million and for the ferry it was £3.7 million.

The study assumes the equipment would be fitted to a new ship, but it looks likely that it could also be retrofitted in some cases, Willson said.

To deliver carbon emission savings of 90%, the equipment then needs 17% extra fuel consumption for a ship running on LNG, or 24% for one running on marine gasoil.

The technology is likely to be most suited to larger ships with a better ratio of dead weight to engine capacity, Willson said.

It seems to be particularly good for long-haul, heavy shipping.

"Carbon capture or any kind of complex process like this is never going to be particularly attractive for shorter-haul routes; you're just putting too much capital cost in the box," he said.

"It seems to be particularly good for long-haul, heavy shipping."

"On the return voyage, you can capture 90% of the CO2 for the entire voyage without having a detrimental effect on cargo deadweight," he said.

In particular, this may benefit tankers or LNG carriers returning to export terminals that are close to older empty oil or gas fields where the captured CO2 can be stored, Strachan suggested.

The study gives an estimate of 36 months for the technology to be piloted, a demonstrator to be built and for it to complete sea trials. Houlder and PMW have established agreements with international oil companies and major shipping companies "to explore the application of the technology to their fleets and investigate investment options," they said in the report.

The idea of carbon capture taking hold as a means of reducing shipping's carbon emissions may need some diplomatic work at the International Maritime Organization (IMO). One NGO source has previously told Ship & Bunker that the IMO is focusing on stopping emissions being produced in the first place, making capturing them after combustion "a complete non-starter."

We'll start the process and see how much momentum there is, and then we will see if the IMO takes interest.

"We'll start the process and see how much momentum there is, and then we will see if the IMO takes interest and considers this as an alternative to zero-carbon fuels," Strachan said.

The fact that the equipment offers only 90% emissions abatement could be frowned upon at the IMO, with its aim to fully decarbonise shipping as soon as possible after 2050. But that 90% figure could theoretically be raised to as high as 99%, Willson said, and further emissions savings could be delivered by blending some biodiesel into the bunker fuel being used, or running on synthetic or bio-LNG.

"While zero-carbon fuels probably need to be, and probably will be, the longer-term solution, having a bridging solution, particularly one that could retrofit to existing fleets, that can be delivered without a huge infrastructure investment, seems to be much more attractive in the short term," he said.

Bunkerworks has taken delivery of the 325 dwt Viking Star, to be deployed in Mumbai.