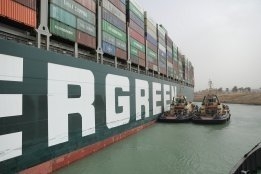 The Ever Given was stuck in the canal for almost a week. Image Credit: Suez Canal Authority

Container line Evergreen has characterised the Suez Canal Authority's $916 million claim over the grounding of the 20,000 TEU boxship that blocked the waterway last month as 'largely unsupported'.

The Ever Given has been arrested following a successful court application by the authority on Tuesday, Evergreen said in a statement on its website on Wednesday.

The owners of the vessel, Japan's Shoei Kisen Kaisha -- from whom Evergreen charters the ship -- were presented with a claim for $916 million on April 7, the UK P&I Club said on Tuesday.

"During the meeting between the shipowners and SCA on April 12, 2021, no consensus was reached as SCA's claims are largely unsupported and lack any detailed justification.

"In order to lift the arrest order as soon as possible, Evergreen is urging all concerned parties to facilitate a settlement agreement to be reached."

The UK P&I Club also registered its disappointment at the arrest.

"The SCA has not provided a detailed justification for this extraordinarily large claim," the organisation said.

"The grounding resulted in no pollution and no reported injuries.

"The vessel was re-floated after six days and the Suez Canal promptly resumed their commercial operations.

"The claim presented by the SCA also does not include the professional salvor's claim for their salvage services which owners and their hull underwriters expect to receive separately.

"The P&I aspects of the claim are relatively modest, with the exception of a claim for loss of reputation, which is disputed."

Also at question is the role of the Suez Canal Authority's pilots -- who are required to oversee ships' passage through the waterway -- in the grounding.

"When the grounding occurred, the vessel was fully operational with no defects in her machinery and/or equipment and she was fully manned by a competent and professional Master and crew," the UK P&I Club said.

"Navigation was being conducted under the supervision of two SCA pilots, in accordance with the Suez Canal Rules of Navigation."

The authority plans to shift tugboats and launches operating in its waters to using alternative fuels.

"Our aim is to transit progressively into alternative fuels such as LNG, methanol, ammonia and biofuel," global director Nick Browne told Ship & Bunker.