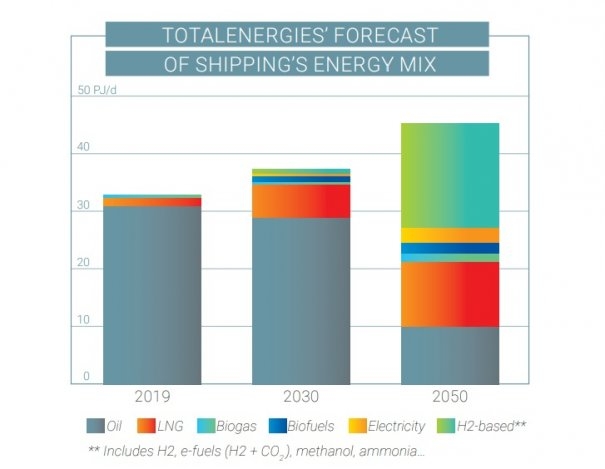 Fossil fuel-based bunkers could still be taking up nearly 50% of marine energy demand in 2050, according to France's TotalEnergies.

The company forecasts marine energy demand growing from about 33 petajoules/day in 2019 to about 37 PJ/day in 2030 and about 45 PJ/day in 2050, it said in a new white paper on the future marine fuel mix this week. Of that 2050 total, it expects about 10 PJ/day to be conventional oil-based bunkers and another 12 PJ/day conventional fossil LNG.

In its 2030 forecast the company sees oil-based bunkers retaining the majority of the market with about 28 PJ/day and conventional LNG taking about 6 PJ/day.

TotalEnergies is currently the world's largest supplier of LNG as a bunker fuel.

The company expects hydrogen-based fuels to be the largest fuel category in 2050, with about 18 PJ/day of demand, covering synthetic LNG, synthetic methanol, synthetic ammonia and green hydrogen.

"As we head towards IMO 2050, there is no doubt that the future of shipping will comprise a mix of fuel solutions and the shipping industry will need all of them to meet future fuel demands," the company said in the report.

"We believe LNG has an important role, along with bioenergies and hydrogen-based fuels, in shipping's energy transition.

"The adoption of marine LNG is expected to continue to experience an accelerated growth into 2030."

The deals could signal the rapid growth of alternative fuel supply in Singapore over the coming years.