IMO today released its much anticipated Fourth GHG Study, a critically important document that will help shape Marine Shipping's emissions reduction path in the years and decades ahead.

In addition to providing an update on the absolute levels of GHG emissions up to 2018 and projections out to 2050, importantly it provides previously lacking data against which the IMO 2030 and IMO 2050 emissions reduction targets can be based.

Below we detail four key findings from the study and what they mean for the industry.

1. Emissions in 2018 are Below 2008 Levels, Future GHG Emissions are Lower than in the Third IMO GHG Study - but this is No Cause to Relax Reduction Efforts

2008 is a critical year as part of the emissions debate as it is the baseline year against which future reductions including the IMO 2030 and IMO 2050 targets are based. While emissions in 2018 are lower than in 2008, University Maritime Advisory Services (UMAS) who was lead author of IMO's Third IMO GHG Study and led the emissions inventory work in the Fourth IMO GHG Study, says this does not mean the industry can relax. 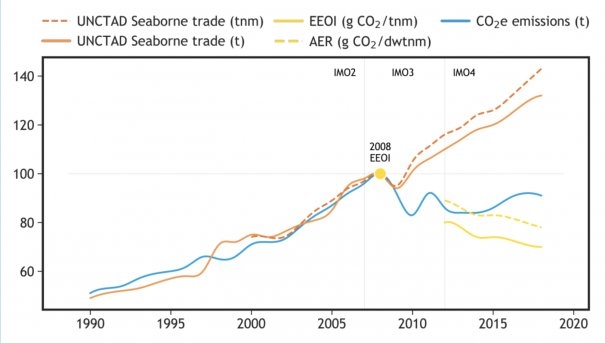 UMAS released this graph showing how emissions in 2018 were below 2008 levels, but are rising. Image credit: UMAS

"Emissions were below 2008 levels, but are rising and were on track to exceed 2008 in ~2019/2020. 2020 will clearly now be impacted by Covid-19, but the long-run trends remain either holding emissions constant or for emissions to increase. This is predominantly because of trade growth exceeding and expected to continue to exceed carbon intensity improvements," UMAS said in notes released alongside the report.

While some in the industry may take the findings to mean shipping has been doing a good job at reducing emissions, critics will no doubt see the data as supporting the argument that IMO's emissions reduction targets are not ambitious enough.

Indeed, as green group Transport & Environment said in a statement today: "[The study] reveals the weakness of the IMO's 40% carbon intensity reduction target - three-quarters of the targeted improvements had been achieved before the goal was even adopted in 2018."

The industry may well see a tightening of its emissions targets as a result.

2. The Percentage of Shipping Classed as Domestic has been Drastically Underestimated

There is more responsibility and potential for shipping GHG emission reduction within national emissions accounting, than had previously been thought

This change is significant as IMO has responsibility only for international shipping emissions.

"There is more responsibility and potential for shipping GHG emission reduction within national emissions accounting, than had previously been thought," UMAS says.

The change could also prompt increased pressure on domestic authorities to take action on reducing ship emissions, and in turn raise industry concern over a highly undesirable patchwork of different regulations being introduced.

Despite EEDI regulation being in effect over the study period of 2012 to 2018, with the exception of larger container ships most ship types improved efficiency just 3% or less.

"The dominant driver in carbon intensity trends was speed and operation," says UMAS.

4. Prepare for Regulations "Loophole" on Methane, Black Carbon Emissions to be Closed

However it is measured, CO2 accounts for over 90% of shipping's climate impact. But the report notes that methane (CH4), nitrous oxide (N2O), and Black Carbon (BC) also have very important climate impacts.

Notably, the Fourth GHG study is the first to explicitly estimate BC's contribution and found it to be the second most significant emissions species in climate impact terms.

Methane emissions, meanwhile, showed "the most remarkable growth trend over the period studied" increasing some 151%.

"This is because of increased use during the period of machinery with high levels of methane slip (increasing use with dual-fuel reciprocating engines)," UMAS says.

"Given the important climate impacts of BC and methane, not regulating these species is a major loophole and shortcoming in current policy.

"Shippers, shipowners and engine manufacturers should anticipate that these are emissions species that are likely to be controlled in the future and that their optimum fuel choice and machinery may be impacted when this occurs."

UMAS' comments are a reminder that IMO 2020 is just the beginning of a period of significant regulatory change that the industry faces in the coming years. It is also a reminder of the quandary shipping finds itself in; it is being told it must change, but the all important rules governing that change have yet to be decided.

The Covid strains are providing a series of diminishing impacts.

The Clydebank Declaration aims to set up corridors in which ships can operate with zero emissions and take on green fuels at both ends.