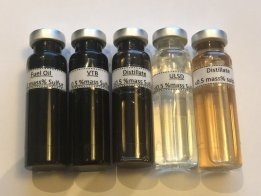 One of the main problems shipping has had with the new 0.50% sulfur bunker fuels so far this year has been arguments over the one characteristic of them that everyone's supposed to agree about: their sulfur content.

Standard commercial terms taking the ISO 8217 specifications as their guide allow for a 95% confidence limit on the sulfur content -- meaning in practice, any fuel tested after purchase by the buyer at up to 0.53% should still be commercially acceptable.

Any subsequent claim by the buyer arguing that the fuel was off-specification would have little chance of succeeding.

But the International Maritime Organization's Marpol Annex VI regulations take 0.50% as a firm limit, with anything tested even marginally above that level being non-compliant.

If you're the buyer, you have to accept it

With the cases that fall in that crack between 0.50% and 0.53%, there's potential for trouble for buyers. And there seem to be a lot of these cases emerging.

At an industry event at the end of last year, Bjarke Staal, director of credit, claims and legal at bunker trader BMS United, said his company had heard of 30-40 cases of these disputes in the market over the past month.

"If you get something tested at 0.51, 0.52%, it is still legally covered under the contract," Staal told Ship & Bunker Tuesday, adding that "the reproducibility of the confidence level is a physical fact."

Staal pointed out that within a cargo of 0.50% sulfur fuel, any single test could potentially reveal sulfur content anywhere between 0.47% and 0.53%, so if the product is based on normal standards then the confidence level may be applicable.

The 95% confidence limit exists because bunker fuel is not truly homogeneous in nature. If a sample is tested and a parameter is indicated to be above the limit but within the 95% confidence limit, it is accepted that repeated random sampling of that fuel would show it to be within specification the vast majority of times.

"We're seeing a lot of clients coming in and asking for 0.47% now because they want to avoid this problem," Staal said.

If the ship's test result is above that threshold ... the buyer has legitimate reason to raise a claim

A large bunker buyer in Northwest Europe and the Mediterranean said they usually would submit a claim when they discover fuel to be off-specification, but there have been cases when they have taken product that they found to be marginally over 0.50% and accepted it without making a claim.

According to Unni Einemo, director of the International Bunker Industry Association (Ibia), buyers still have a legal recourse if they can demonstrate their supplier had tested the fuel's sulfur content at over 0.50%.

"If the ship's test result is above that threshold ... the buyer has legitimate reason to raise a claim," Einemo wrote in an article on Ibia's website in December.

"There is a dispute resolution procedure described in ISO 4259 which is most commonly simplified to say that the supplier's retained sample should be tested.

"Unless that sample meets the limit, with no confidence margin added, the supplier cannot claim to have met the limit.

"Regardless of the commercial reality, if the ship ends up being penalised for breaching the sulphur limit and it is proven that the root cause is because the fuel, as delivered, was non-compliant, the supplier will face liability for that."

The main problem lies with how port state control authorities (PSCs) interpret the law, and how aggressive they decide to be in enforcing it.

Some may be inclined to be lenient in these cases -- after all, there's unlikely to be any significant financial advantage in buying a 0.53% sulfur VLSFO, and so any cases like this are likely to be a result of mistakes rather than deliberate non-compliance.

But it's also possible that some authorities will be keen to appear vigilant right from the start of the new sulfur limit this year, and will go after even marginal infractions aggressively as a statement of intent to the shipping industry.

PSCs should be more forgiving in the early stages of the 0.5% limit, but it's not advisable to rely on that

"Generally PSCs should be more forgiving in the early stages of the 0.5% limit, but it's not advisable to rely on that," Steve Simms, Principal at Simms Showers LLP, told Ship & Bunker this week.

"It's also of course up to the PSC as to whether to require debunkering, or to impose a fine, or both."

The type of punishment the PSCs choose is key to how disruptive these cases can be for shipowners.

Fines for these marginal cases would be an irritant, but unlikely to cause significant financial problems.

The delays involved in undergoing debunkering, however -- where a ship is forced to return to port, remove all the non-compliant fuel from its tanks and take on more fuel before being allowed to leave -- are far more of a threat.

When the sulfur limit in the emission control areas (ECAs) was lowered to 0.10% in 2015, there were reports of some European authorities forcing debunkering in cases where the sulfur content was found to be only marginally above the cap.

"Denmark has been rigorous in enforcement, so we'd expect that -- Norway also," Simms said.

"I wouldn't bank on leniency from any particular jurisdiction."

Why Has This Only Just Become a Problem?

Sulfur is currently the only parameter where IMO has placed a limit beyond which the fuel may not be consumed.

The previous sulfur cap of 3.5% was not a problem as the average sulfur content of high sulfur fuel oil, by far the most common fuel in the pre-IMO 2020 era, was comfortably below the limit at around 2.7%. Sulfur limit violations were therefore limited to the ECAs, where the limit is set to 0.10%.

"This is not a new issue, but having marginally off-spec sulfur MGO for ECA use has been less of a problem for individual owners because at worst the product can be downgraded and consumed elsewhere. With the global 0.50% limit, the choices are only to burn it and risk the consequences, or debunker it," Adrian Tolson, head of BLUE Insight, told Ship & Bunker.

Everyone issued LOI's with small ECA claims as they saw no downside. Now we see downside.

"Marginally off-spec 0.50% is also a much, much bigger problem for the industry as a whole, because it impacts many more owners, the dollar value of the fuel involved is much higher, and the potential claim size significantly greater."

Tolson says clarity on the matter is needed for the sake of both suppliers and buyers, and has made addressing the matter part of his platform in the upcoming Ibia election.

"Everyone issued LOI's with small ECA claims as they saw no downside. Now we see downside," he added.

"What supplier wants to issue a letter of indemnity when the financial and legal consequences are so ill defined?"

Bunker suppliers are attempting to give buyers some legal protection in these cases, according to NSI's Paul Hardy.

"What seems to be the norm is the supplier is offering a letter of indemnity rather than looking at other options," Hardy said.

"In theory a letter of indemnity gives you some protection from any potential fines.

"What it does not do though is protect you from reputational damage if you are one of the first companies to be caught with 'off-spec' product."

This is the other big problem for shipowners -- quite apart from any legal concerns, the reputational risk of being labelled a 'sulfur cheat' could be a considerable threat to their companies.

The earliest cases of non-compliance announced by the PSCs are likely to receive widespread attention in the media, even for minor infractions.

Cruise lines and the largest publicly traded container shipping companies are particularly sensitive to reputational impacts, and these companies may be best advised to stick with marine gasoil for now, or to insist on VLSFO blends tested by the supplier at 0.47% or below.

Clean Your Pipes to Avoid the Lawyers

Ultimately, while these cases will be a recurring headache in the first six months of this year, this is a problem that should resolve itself over time.

No-one is deliberately producing or supplying 0.53% sulfur VLSFO to make a fast buck; the financial incentives for doing so, or deliberately buying such a product, would be negligible.

This is a problem largely caused by the HSFO residue left in all the pipes, barges and fuel tanks that the new VLSFO blends are touching before they reach ships' engines.

the situation should improve gradually as the residue disappears over time

That residue is leaving fuels tested earlier at 0.50% considerably dirtier by the time they travel through the ship, but the situation should improve gradually as the residue disappears over time.

Bjarke Staal at BMS said his company has already observed a decline in the number of marginal sulfur disputes this year as delivery infrastructure is cleaned and refineries improve their blending recipes and production lines.

If PSCs can resist the urge to prosecute shipowners aggressively for the first few months of this year, the industry will be able to get through the worst of this situation relatively unscathed.

Special general meetings of the two clubs' members on May 27 endorsed the proposal to merge the two organisations into a single mutual insurer.

The firm's new unit in the country, Oilmar Greece SPC, will focus on developing its presence in the Greek market.