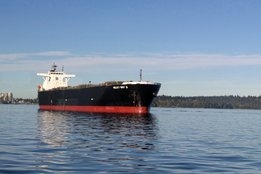 Bunker suppliers are offering 0.30% max sulfur bunkers to owners as an option for preparing their fuel tanks ahead of the 0.50% sulfur cap on marine fuel that comes into force from January 1, 2020.

"Max 0.3% sulfur product is ideal for some owners who would prefer not to clean tanks and calculate a sulfur downgrade as an alternative," says Michael Donaldson-Badger, Managing Director of NSI's Dubai operation.

"We are working with several owners who will follow a dilution method where residues are difficult or impractical to access. We have sourced several 0.3% sulfur products for owners in the region and this has proved a commercially advantageous method of tank preparation for them."

Traditional tank cleaning, the use of chemicals additives to HSFO, and dilution using LSMGO are the principal other options available to owners.

most expect the IMO2020 grade VLSFOs to be produced very close to the 0.50% sulfur limit

Tank, and indeed full fuel system preparation is an important part of owners' IMO2020 preparation strategy to ensure their fuel next year is compliant not just on the BDN, but also where authorities say it counts which is at the engine inlet.

As suppliers in the majority of cases will be blending down to the 0.50% limit, most expect the IMO2020 grade VLSFOs to be produced very close to the 0.50% sulfur limit - blending past that will add unnecessary cost to the finished product so will not be done unless there is good reason to do so.

As such, even small amounts of high sulfur material remaining within a vessel's fuel system could lift the sulfur content of a 0.50%S VLSFO as lifted to be above the 0.50% limit at the engine.

Donaldson-Badger discusses tank cleaning as part of a wider discussion on IMO2020 preparation in his latest article here: https://shipandbunker.com/news/world/670141

He can also be contacted for more information about the 0.30%S products as follows: