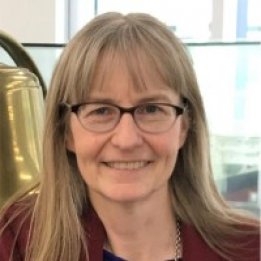 Global energy producer Shell is seeing 'a mosaic of different fuels' emerging for shipping's energy mix, and the company is seeking to play a role in a range of alternative bunker markets.

At present the company has conventional bunkers, liquid biofuels, LNG and bio-LNG available for its customers. But the company sees a range of other options starting to become available, albeit each with its own advantages and disadvantages, Dr Alexandra Ebbinghaus, general manager for decarbonisation at Shell Marine, said in an interview with Ship & Bunker.

"There's a mosaic of different fuels coming up which are based on hydrogen," Ebbinghaus said.

At the moment we see a lot of options, and the need to do much more work to realise these options into actual opportunities.

"When we look at those, each is disadvantaged against the fuel oil from the availability, cost and performance point of view.

"I think the main difference is that for a synthetic methane or methanol, the engine technology, the vessel technology and the infrastructure exists to put those into the vessel.

"At the moment we see a lot of options, and the need to do much more work to realise these options into actual opportunities."

But despite all of the alternatives emerging in the marine fuels market, Shell still sees a market -- albeit a diminishing one -- for conventional bunkers for decades to come, Ebbinghaus added.

"What we hope is that in order to meet our ambition of meeting climate goals, the switch happens quite quickly from the 2030s onwards."

"[Biofuel] demand is very much dependent on the pricing," she said.

[Biofuel] demand is very much dependent on the pricing.

"If you can offer things at a lower cost, you could sell a million tonnes a year; if you don't, it goes down to tens of thousands of tonnes.

LNG is for now the dominant alternative bunker market, with 604,000 mt of sales at Rotterdam last year and 50,000 mt in Singapore.

"We like to say that LNG is a fuel in transition," Ebbinghaus said.

"Today, it's the lowest-emissions fuel you can buy which is mature.

"The criticism for LNG is methane slip, in the upstream where you get the natural gas from and on board from the engine. Work is ongoing on both."

The downside of LNG in this regard is going to reduce over time, and hopefully be eliminated by 2030.

This research and development work on methane slip could reduce the problem significantly over the next decade, she added.

"The major oil and gas companies have put the target forward to eliminate methane slip upstream by 2030," Ebbinghaus said.

"So the downside of LNG in this regard is going to reduce over time, and hopefully be eliminated by 2030 or from 2030 onward.

"Then if you look at the performance of a synthetic LNG, it can approach or be net-zero."

The firm has recently carried out a bio-LNG trial, and is planning more later this year.

Shell sees ammonia as a good possibility in the marine space. but sees significant challenges in the short term, Ebbinghaus said.

"Ammonia production is lower-cost; you just have to get your green electricity," she said.

"But the use of ammonia on the vessel is completely unproven.

The promise of ammonia is really that you have lower costs than the synthetic carbon fuels for the fuel manufacturing.

"The promise of ammonia is really that you have lower costs than the synthetic carbon fuels for the fuel manufacturing, but you do not know what the vessel costs are going to be.

"Ammonia, for us, has much more of a big question mark associated with it; it may not happen, but if it happens it has a good possibility."

The firm sees stronger prospects for methanol in the short term once green forms of the product become available at scale.

Shell is definitely looking at the opportunity space for methanol.

"On the methanol side, you are starting to see some small elements of demand coming out, and supply agreements," Ebbinghaus said.

"Shell is definitely looking at the opportunity space for methanol.

"The disadvantage of methanol versus LNG is that all production is fossil-based for both, but the fossil LNG on a well-to-wake basis still has the opportunity to reduce the emissions by up to 23%, whereas fossil methanol is actually worse than fuel oil on a well-to-wake performance."

Singapore and Rotterdam Work Together on 'Green and Digital Corridor'

The Port of Rotterdam and Singapore's Maritime and Port Authority have signed a memorandum of understanding to work together on alternative fuel supply and digitalisation.