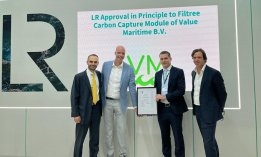 A carbon capture and storage system for ships developed by Value Maritime has won the initial approval of classification society Lloyd's Register.

LR has awarded Value Maritime's Filtree System its approval in principle, the maritime technology firm said in a statement on its website on Wednesday.

The system is set to be installed on two Eastern Pacific Shipping MR tankers, which will be the largest oceangoing vessels equipped with carbon capture technology.

The system captures carbon emissions from a ship's exhaust for storage or use in industry.

Value Maritime's version of the system can capture up to 40% of a vessel's CO2 emissions, and has potential to capture more than 90% in future.

"Carbon capture has the potential to play an important role in reducing the industry's carbon emissions, complementing our efforts to adopt alternative fuels and to increase the efficiency of our fleet," Mirtcho Spassov, green shipping manager at Eastern Pacific Shipping, said in the statement.

"We are excited to be deploying this technology on our vessels working in close cooperation with Lloyd's Register and Value Maritime."

Martiens Potgieter has joined the firm as a bunker trader as of this month.