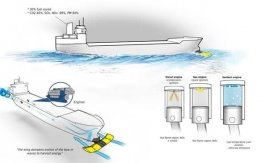 A consortium of engineering companies and universities has been awarded European Union funding for a project seeking to minimise fuel consumption as a means of cutting shipping's emissions.

The SeaTech consortium, coordinated by technology group Wärtsilä, aims "to develop two symbiotic ship engine and propulsion innovations that when combined, could lead to a 30 percent reduction in fuel consumption," Wärtsilä said in a emailed statement Monday.

"It involves precise controlling of the engine to achieve radical reductions in exhaust emission levels.

"The renewable energy based propulsion innovation is a biomimetic dynamic wing mounted at the bow of the ship to augment propulsion in moderate and heavy sea conditions.

"By capturing wave energy, extra thrust is produced and ship motions are dampened."

By combining the two innovations, Wärtsilä estimated it could achieve reductions of 99% in emissions of sulfur oxides and nitrogen oxides, 46% in carbon dioxide and 94% in particulate matter.

Local authorities may be intepreting the country's environmental code as considering open-loop scrubber washwater being discharged as inflicting damage on the environment.