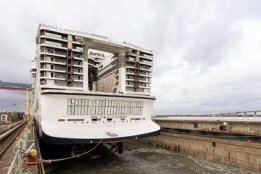 The MSC World Europa and MSC Euribia will be MSC Cruises' first LNG-powered vessels when they join its fleet next year. Image Credit: MSC Cruises

MSC Cruises has set out plans for trials of an LNG fuel cell system on board one of its cruise ships.

The company plans to install a fuel cell pilot plant on board the MSC World Europa, it said in a statement on its website this week. The solid oxide fuel cell, selected by MSC and Chantiers de l'Atlantique and developed by Bloom Energy, will cut GHG emissions by 30% compared with a conventional LNG engine, according to the company's estimates.

"It also offers the advantage of being compatible with LNG, as well as several low carbon fuels such as types of methanol, ammonia and hydrogen," the company said in the statement.

"This project will form the building block for future larger installations and the beginning of an even closer collaboration between MSC Cruises and Chantiers de l'Atlantique on R&D of fuel cell technology."

The MSC World Europa and MSC Euribia will be MSC Cruises' first LNG-powered vessels when they join its fleet next year.

The firm's board last week approved plans to equip the vessels with dual-fuelled engines capable of running on LNG as well as conventional bunkers.

Meanwhile, the EU could impose a Russian oil ban by end of this year.