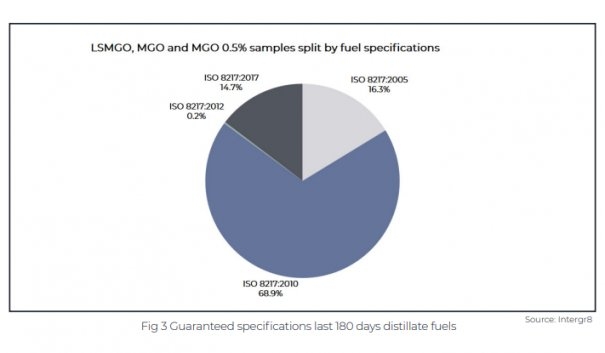 Integr8 Fuels says 11.6% of fuels it supplied over the last six months were sold against the older 2005 revision of ISO 8217, with distillates the most likely grade to fall under the older specification.

In a fuel quality report released this week setting out the details of the bunker fuel deals it has facilitated over the past six months, the firm said that more than 16% of distillate-grade bunkers it sold were guaranteed against the 2005 ISO specifications, rather than the three more recent sets.

Bunker buyers are generally encouraged to buy against the most recent ISO specification as it affords the highest standard for fuels.

"It is positive news that at least for residual fuels we are seeing 2005 specifications becoming virtually obsolete, probably because of two main drivers," the company said in the report.

"Firstly, fewer customers are now requesting 2005 specifications given the added protection afforded for critical parameters like Catalyst Fines (Aluminium and Silicon ) and Sodium with 2010 (or later) specifications, and secondly, suppliers have in general moved away from 2005 specifications because of their position being more problematic when faced with the inevitable notice relating to Clause 5 or chemicals and added substances.

"The same, however, cannot be said for distillate fuels with almost a fifth of fuels still being sold to this 17-year-old specification, the supply of which is particularly prevalent in the Indian subcontinent with pockets noted elsewhere, one such area being the eastern seaboard of the United States."