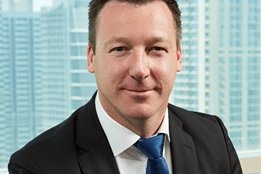 The introduction of a 0.50% sulfur cap on marine fuel in 2020 will result in increased financial pressure on both Shipping and physical suppliers, a situation that will ultimately be to the benefit of large bunker traders, Glander International Bunkering (GIB) CEO Carsten Ladekjaer has told Ship & Bunker.

"The IMO 2020 cap is the hot topic on everyone's lips these days. I have no doubt that this will lead to a shift in purchase patterns and trade flows, to some extent. I believe that large trading houses, such as Glander International Bunkering, will generally benefit from it," said Ladekjaer.

"We know that one of the reasons behind the increased competition in the current market is a direct result of the abundance of risk-willing capital currently available in the bunkering sector. The expected increase in prices globally after 2020 will lead to an increased demand for credit. Physical suppliers are generally risk averse and not geared towards granting extended credit to the clients. Instead, they are likely going to need all the cash they can get to finance their OPEX and not least their more expensive cargoes.

"The shipping sector is already under-financed as it is today, some estimates say by USD 30 billion. I find it hard to believe that the banks, who to a large extent are trying to retreat from the shipping sector, will be eager to fill in a future widened gap in the industry - to cover fuel costs."

As already discussed on Ship & Bunker, the new 2020 cap is expected to bring with it not only a shift away from HSFO to compliant distillate products, but also the introduction of a raft of new hybrid, blended, and desulfurized fuel oil products.

those who opt to lift ULSFO after 2020 will need to ensure that whoever they are buying from, knows their sourcing and their products and that they have reasonable Terms & Conditions

This, in turn, will place its own pressures on the industry.

"In addition to the financial implications of 2020 in the bunkering sector, there are the technical and logistical issues. Again, traders (and brokers) will have an opportunity to add additional value to the market through their networks, reporting and consultancy services," said Ladekjaer.

"Furthermore, those who opt to lift ULSFO after 2020 will need to ensure that whoever they are buying from, knows their sourcing and their products and that they have reasonable Terms & Conditions, if something should go wrong. ULSFO can be a tricky merchandise."

The comments come at a time of much debate over the changing role of bunker traders within the industry, with the reality of contracting global bunker volumes a key driver for this change.

At the end of 2016, many players reported restructuring efforts in response to the "new market norms" and some industry talking heads suggest more still needs to be done, particularly from the traders.

"In a declining market, it is only natural that the involved players must adapt. Historically, over the years, bunker demand has been on the rise and as a result, most major trading companies have been expanding, in terms of both staff and office locations," said Ladekjaer.

"Lately due to the market conditions we have seen a widespread consolidation within the bunkering sector. We don't have to look any further than to the clients of our own sector to see a similar picture."

As for its own response to these new norms, Ladekjaer says the changes at GIB have been "quite small."

"In Glander International Bunkering we have always endeavoured to maintain a lean, professional, and competitive operation. Therefore, the measures we have had to take during the decline in demand have been quite small and I would say, they have been no more than what normal good household entails. By this I mean that we have strived to ensure that all our staff are continuously qualified and more importantly continuously motivated. So far this has created quite a robust, hardworking, value adding performance culture amongst our teams and this is the path that we intend to follow going forward," he said.

"During the last few years we have seen some competing trading houses scale down on the number of representations that they had – some even quite extensively. However, along with challenges comes opportunities and at Glander International Bunkering we have been fortunate enough to add a few new units to our brand."

Looking ahead, Ladekjaer sees GIB as being well placed for the future, and welcomes the disruption the new 2020 regulations will bring.

The IMO 2020 0.5% Sulphur Cap will likely throw a curve ball to the market

"At Glander International Bunkering we have taken a close and hard look at the market to determine where we think it is heading. This has resulted in a detailed master plan which I am confident will give us direction as well as enable our company to be at the forefront of future developments in the industry and to evolve, grow and prosper," Ladekjaer told Ship & Bunker

"The IMO 2020 0.5% Sulphur Cap will likely throw a curve ball to the market. But as a professional service provider, these are the types of complex scenarios that we welcome. The IMO 2020 will in fact enhance market demand for those with the expertise and infrastructure ready to take the challenge on, and that's where we come in.

"Overall, we welcome the IMO 2020 – and it's going to be good for the environment too."