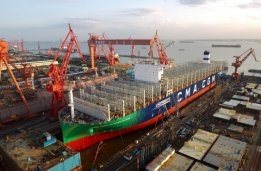 The largest LNG bunkering barge in the world has arrived in Northwest Europe, to be operated by French energy producer Total to refuel CMA CGM's giant new gas-fuelled container ships.

The Gas Agility, owned by Mitsui OSK Lines, arrived in Rotterdam last week, according to a statement from the Port of Rotterdam.

The ship will primarily be used to fuel the nine new 23,000 TEU gas-powered container ships ordered by CMA CGM in 2017. The first of these ships, the CMA CGM Jacques Saade, was launched in September 2019 and is due to enter service later this year.

Total has agreed to supply the new ships with 300,000 mt/year of LNG over the next decade, making CMA CGM by far the largest buyer of LNG bunkers once the vessels enter service.

St Croix plant could be fully operational later this month.

The cruise industry is responsible for about 4% of global bunker demand.

In response to EU regs and COVID-19 demand destruction.