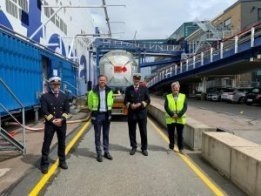 The Stena Germania took on a stem of blue methanol for the first time in June. Image Credit: Stena Line

Methanol producer Proman is set to work with shipping firm Stena on developing the use of methanol as a bunker fuel.

The two firms are working on a methanol retrofit and supply service allowing ships to be converted to run on methanol, Proman said in a statement on its website on Thursday. The service will be available to both Stena's vessels and those owned by third parties.

"Proman and Stena have uniquely complementary skills enabling them to jointly offer a turn-key solution for the shipping industry to benefit from a methanol-based pathway to a sustainable low-carbon future," the company said in the statement.

"In 2015 Stena was the first ship owner in the world to convert a large vessel to methanol power together with a current partner.

"Since then, the vessel has been operated safely and conveniently, thereby demonstrating the potential of using methanol as a marine fuel."

The two firms have already worked together to put three ships capable of running on methanol or VLSFO on the water. Stena also converted its ferry the Stena Germanica to run on methanol in 2015.

The company has also set a target of a 30% reduction in emissions from its ocean freight activities by 2030.

The ECJ may need to rule on whether the EU ban on jet fuel trades to Syria covered foreign governments and militaries.