HSFO Demand Increase May Be Behind Rise in Off-Spec Sulfur Claims: Cockett 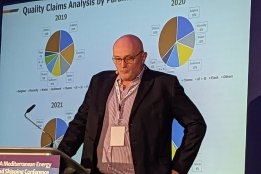 The increase in HSFO demand driven by the use of scrubbers may be part of the reason behind a rise in off-specification bunker claims over excess sulfur content, according to Cockett Group.

Some 38% of the claims seen by Cockett so far this year have been over sulfur content, Colin Holloway, the firm's global head of technical, said at the IBIA Mediterranean Energy and Shipping Conference in Malta on Thursday.

The Amsterdam-Rotterdam-Antwerp hub saw a large concentration of the sulfur claims.

Holloway speculated that changes in how bunker supply infrastructure is operated in response to increased HSFO demand may be part of the reason for the change.

Chris Turner, bunker quality and claims manager at Integr8 Fuels, suggested the price rises seen this year may also be part of the picture.

VLSFO producers coming up with blends closer to the 0.50% sulfur cap as a means of cutting costs could be part of the reason for some accidentally coming in over the limit, he said.

"What we've seen is the average sulfur in ARA has crept up from around 0.47% to 0.49% in the past 12-18 months, and particularly since the price of crude started to climb," Turner said.

"That's all down to blending -- people are blending that much closer to the 0.50% level."

ZeroNorth Bunker launched as an improved and integrated Bunker Planner within the ZeroNorth Platform.

The organisation's new report, Insights Into Onboard Carbon Capture, analyses the various carbon capture technologies available to the shipping industry.