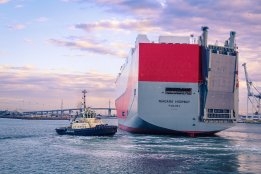 The firm is currently running some of its vessels on biofuel blends. Image Credit: Svitzer

Towage operator Svitzer, a subsidiary of Denmark's AP Moller-Maersk, has set a target of 2040 to reduce its GHG emissions to net zero.

The firm will first aim for a 50% reduction in the carbon intensity of its fleet by 2030, before fully decarbonising by 2040, in line with Maersk, Svitzer said in an emailed statement on Tuesday.

The targets are measured against a 2020 baseline.

"Svitzer will also focus on changing the fuel mix of its fleet," the company said in the statement.

"The success of the organisation's EcoTow project, which has seen Svitzer's entire fleets in London, Felixstowe, and Southampton switch to low carbon biofuels, is currently being replicated more widely across ports in the UK and to the company's global operations.

"Svitzer will also begin to explore methanol as a fuel for towage and, in the long-term, take required steps to retrofit and renew its fleet in order to operate on low carbon fuel solutions."

The firm is looking for candidates with at least seven years of experience in the operation of LNG bunker vessels or small gas carriers.

The LNG tanker Grace Emilia ran aground in the canal on Wednesday.