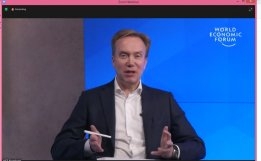 The 16th edition of the annual report sounded the same warning.

The nub of the problem according to WEF is that although the risks are known, not enough is being done to mitigate the negative effects of those risks on society and the economy.

Putting it in economic terms, WEF president Borge Brende said that "the cost of inaction is greater than the cost of action". And he added that 'what gets measured gets done' would be a good way to know when enough is being done.

On the positive side, Brende noted that 80% of global carbon emissions are now included in global temperature reduction targets whereas five years ago, that percentage, at 20%, was much lower.

But he repeated the report's key concern that the world is lagging behind on putting in place concrete measures to achieve a 1.5% global temperature rise as agreed at COP26.

WEF promotes public-private initatives to come up with solutions to the world's problems. Its best known event is the annual meeting at Davos in Switzerland. This month's event has been postponed until the summer because of the covid pandemic.

The working group will seek to align ground infrastructure with fleet availability, as well as ensuring 100% renewable power is available.